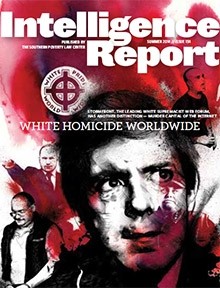 In the wake of a neo-Nazi’s deadly attack at Jewish facilities in Kansas last month, the new issue of the SPLC Intelligence Report explores the white supremacist movement through the eyes of a former racist skinhead and an FBI informant, and examines the role of the Internet in promoting racist violence.

In the cover story of the Summer 2014 issue, a two-year investigation reveals that active users of Stormfront, the world’s leading racist Web forum, have murdered nearly 100 people in the past five years.

“The rampage in Kansas that left three people dead is only the latest reminder that the United States faces its own homegrown terrorists,” said Mark Potok, senior fellow at the SPLC and editor of the Intelligence Report. “The threat from the white supremacist movement in America is real. We minimize it at our own peril.”

The violent nature of the movement was seen by a Klan member who became an FBI informant after a fellow member of the Knight Riders Klan group allegedly began planning terror attacks against black people. “On the Inside” examines the informant’s time in the Klan and how he “grew a conscience” and aided the FBI.

In “Skin Molt,” a woman describes how she was drawn into the dangerous world of racist skinheads and spent three violent decades in the movement. She also tells how she came to reject the movement and racism.

The issue’s cover story, “White Homicide Worldwide,” shows how the Stormfront web forum has not only provided a gathering place for the white supremacist movement but that registered users have been disproportionately responsible for some of the most lethal hate crimes and mass killings since the website was launched in March 1995. The report found that hate killings by Stormfront members began to accelerate rapidly in early 2009, when President Obama took office as the nation’s first black president.