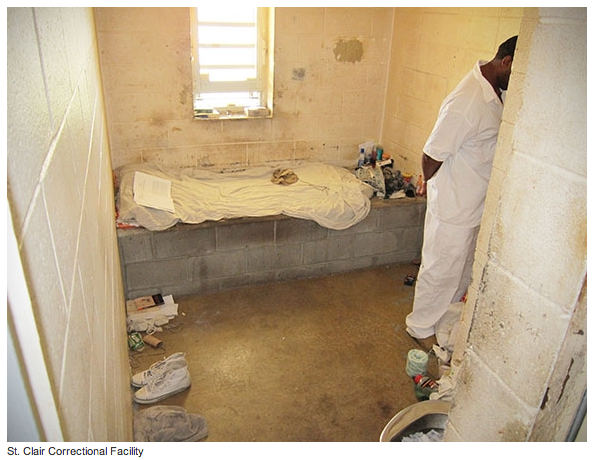 An investigation by the Southern Poverty Law Center and the Alabama Disabilities Advocacy Program (ADAP) has concluded that Alabama’s overcrowded prison system is breaking federal law by failing to provide a humane level of medical and psychiatric care, and by subjecting prisoners with disabilities to discriminatory conditions.

In a report released today – Cruel Confinement: Abuse, Discrimination and Death Within Alabama’s Prisons – the groups described how the Alabama Department of Corrections (ADOC) and its private contractors are “deliberately indifferent” to the serious medical and mental health needs of the state’s prisoners.

The conditions in Alabama prisons violate the U.S. Constitution’s ban on “cruel and unusual punishments” and federal law protecting people with disabilities, the report says.

“When a person is sentenced to prison, they are not stripped of their humanity and they are not sentenced to the pain, agony or death that can result from the lack of health care,” said Maria Morris, the report’s lead author and managing attorney of the SPLC’s Montgomery legal office. “Whenever Alabama determines a person must be incarcerated, it must accept the legal – and moral – responsibility that comes from imprisoning a human being.”

The investigation was based on inspections of 15 Alabama prisons, interviews with more than 100 prisoners and a review of thousands of pages of medical records, depositions and media accounts as well as the policies, contracts and reports of the ADOC and two major contractors.

It was led by the SPLC’s Morris, who, before joining the SPLC, represented prisoners with mental illness as part of a lawsuit that ultimately resulted in the U.S. Supreme Court upholding a federal court order requiring California to address its prison overcrowding.

The Alabama investigation found numerous examples of conditions that threaten the health and lives of prisoners: