Why Does the Historic Tax Credit Matter?

Why Does the Historic Tax Credit Matter? 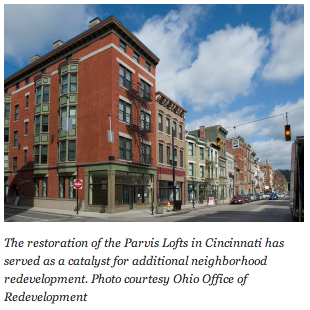 As congressional tax reform efforts take shape on Capitol Hill, advocates of the federal historic tax credit would do well to familiarize themselves with the very tangible results of a program that has resulted in the revitalization of nearly 40,000 historic buildings while creating 2.4 million jobs and leveraging nearly $109 billion in private investment since 1981.

The National Trust recently partnered with Heritage Ohio to help tell the story of the credit’s track record in the Buckeye state—where more historic tax credit projects were submitted in 2013 than any other state. The report, which includes 10 in-depth project profiles and detailed quantitative data, is meant to arm advocates with very real evidence that the credit is truly a catalyst in two dimensions: First it enables historic rehabilitation projects by providing key financing; then the resulting project triggers neighborhood revitalization.

In the words of Heritage Ohio’s board chair, Kevin Pape, the new publication features “wonderful stories of renewed use that simply would not have been possible without federal and state historic tax credits. The credits leverage private investment in places that matter and harness Ohio’s heritage to drive economic development where it is needed most.” Who could argue with that?