What if D.C. made an Olympic effort to end poverty?

What if D.C. made an Olympic effort to end poverty? 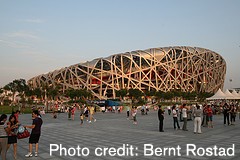 Many of us have been glued to the television over the past week as we watch extraordinary athletes compete in this summer’s Olympic Games. Like competitions of the past, the London Olympics are not only the result of hard work on the part of the athletes but also of remarkable community support and financial investments. I can only imagine that if the District, instead of London, had been selected 10 years ago as the site of the 2012 Games, our city would have made a similar commitment: building grand stadiums, housing and feeding thousands of athletes and putting on a show worthy of the world stage.

So here’s my question: If we were prepared as a community to mobilize the region’s resources and fund the premier athletic event in the world, why can’t we make the same commitment to house our homeless neighbors, feed hungry families and clothe young and old in our community? If our local government and the private sector were prepared to provide beds, healthy meals and showers for athletes from around the world, why do so many among us not have a bed, a healthy meal or a shower?

Consider the following costs of putting on the Olympics: Click here to read more.