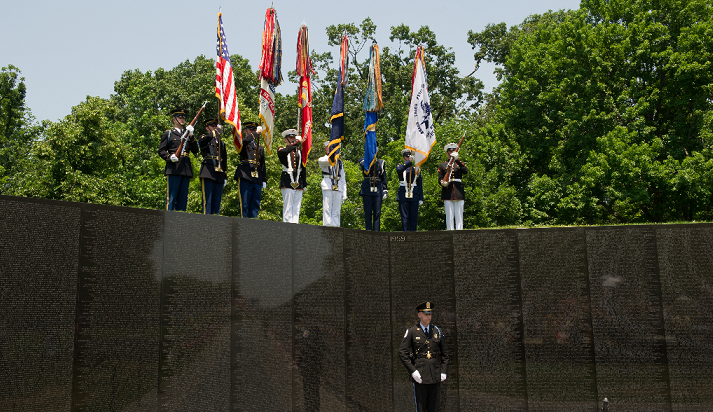 Washington, D.C. – The Vietnam Veterans Memorial Fund (VVMF) and the National Park Service (NPS) will host the annual Memorial Day ceremony to pay tribute to members of America’s armed forces who have made the ultimate sacrifice. Nearly a dozen Medal of Honor recipients are expected in attendance as the United States Postal Service (USPS) will dedicate the 2015 Medal of Honor: Vietnam Forever® stamps as part of the ceremony. The event will be held at The Wall on Monday, May 25, at 1:00 p.m. and is free and open to the public.

Col. Jack Jacobs, USA (Ret.) and Medal of Honor recipient, will present the keynote remarks and pay tribute to the men and women who have fallen in service to their country.

The Medal of Honor is our nation’s most prestigious military decoration. It is awarded by the President of the United States on behalf of Congress to members of the armed services who distinguish themselves through “conspicuous gallantry and intrepidity at the risk of life above and beyond the call of duty” while engaged in action against an enemy of the United States. Of the millions of U.S. service members who served during the Vietnam War, only 258 were awarded the Medal of Honor. Most award recipients made the ultimate sacrifice, giving their lives while performing the courageous acts for which they were later honored.