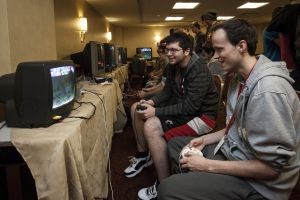 For six days in early January, hundreds of young men and women in comfortable clothes gathered around television screens in a hotel outside of Washington, D.C. They had two objectives: to complete entire video games as quickly as possible and raise as much money as possible for the Prevent Cancer Foundation.

The gathering draws gamers from around the world to play favorites like the Legend of Zelda: Ocarina of Time and Tetris: the Grand Master. Rather than simply progress through levels, gamers competed in "speedrunning," a style of play that requires advance planning and intimate knowledge of the details of each game.

Nearly 1,000 video-game fans took turns playing and watching in person, while 9.4 million viewers followed along via live­stream on twitch.tv, a site that makes video gaming a spectator event and made donations through the Games Done Quick website.