The Truth About Skin Cancer

The Truth About Skin Cancer 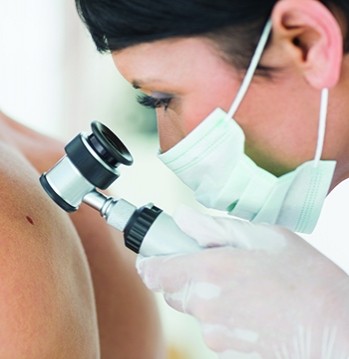 Fifteen years ago, Heather Haux, a high school teacher in Long Island, New York, noticed what appeared to be a scrape on her arm. When it didn’t heal and she sought medical care, she was shocked to find out that the innocent looking mark was skin cancer – a combination of both basal cell cancer, and the rarer but deadlier melanoma. This was the beginning of a chronic struggle with skin cancer, one that has included 47 excision surgeries and chemotherapy as well as frequent visits to a dermatologist to biopsy suspicious lesions. “I’ve had basal cell, squamous cell and melanoma cancers, along with irregular moles,” said Heather. “It’s been difficult physically and disheartening emotionally.”

While Heather is not the typical sun worshiper, having grown up in the center of New York – “not exactly the sunniest of locations,” she said, and has regularly used sunscreen – she is one of the 2.2 million people who are diagnosed each year with skin cancer. The American Cancer Society estimates that 12,980 people will die from skin cancer in 2014, mostly due to malignant melanoma, which is among the fastest rising cancers in the United States.

Anyone can develop skin cancer, according to Kenneth Mark, MD, skin cancer and cosmetic dermatology expert practicing in Manhattan and the Hamptons, New York, although some people are more likely to develop it than others. “Sun exposure, genetics, immune system problems – and bad luck –  can cause skin cancer,” he said.

All skin cancers, said Dr. Mark, especially basal cell and squamous cell cancers, develop partly as a result of exposure to ultraviolet (UV) light. Ultraviolet radiation is part of the electromagnetic light spectrum that reaches the earth from the sun. UV exposure suppresses skin-cell related immunity and causes mutations in the cells, which if not corrected by the immune system, can lead to cancer. The two types of UV light are UVB rays, which are short waves that are known to cause sunburns, and UVA rays, which are longer waves that are more responsible for lasting sun damage and signs of aging. Both UVA and UVB rays, whether from the sun or from artificial sources, such as tanning beds, contribute to skin cancers.

Genetics play a part in the development of skin cancer, too, especially in the case of melanomas, with a family history of melanoma roughly increasing the risk by twofold. Perhaps more important, said Delphine Lee, MD, PhD, dermatologist and cancer researcher of Los Angeles, California, is genetic pigmentation characteristics. “Those with fair skin, bright red hair and freckles are at higher risk for melanomas,” she explained.