The Top 10 Diabetes Breakthroughs of 2014

The Top 10 Diabetes Breakthroughs of 2014 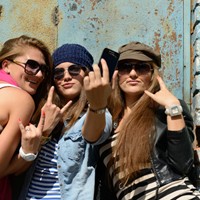 From artificial pancreas trials to stem cell breakthroughs, 2014 was a big year for Type 1 diabetes news. Insulin Nation has compiled 10 big ideas in treatment and technology from the past year:

A report released in June found that some 3 million people are having their medical conditions monitored remotely, and that number should jump to 19 million in the next four years. No word on how many of those 3 million were people with diabetes, but Dexcom won FDA approval in October for an add-on to the G4 Platinum continuous glucose monitor (CGM) to allow users to share their blood glucose readings with up to five followers.

It has been a busy year for Dexcom as…

2. Continuous Glucose Monitors and Pumps Started Talking to Each Other

Dexcom’s G4 Platinum CGM gained a new dance partner when the Animas Vibe pump was approved by the FDAin December. The Vibe is designed to be paired with the G4 Platinum in a way that the CGM can feed numbers directly to the pump. In June, Europeans got their first taste of a pump/CGM integrated system when theMedtronic Duo was approved by European regulators.

With so much going on in wireless medical monitoring, those in the know predicted Apple would jump into the market. Their hunch was right when…

Keep the Momentum Going by Supporting These Diabetes Charities in 2015: