Team USA Goalkeeper Tim Howard: Comfortable in His Own Skin

Team USA Goalkeeper Tim Howard: Comfortable in His Own Skin 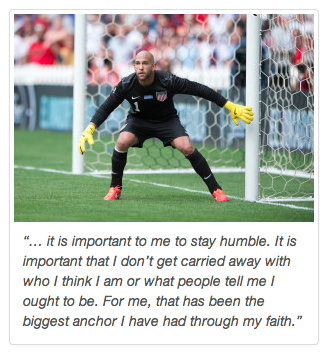 Tim Howard is hard to miss. After all, he’s a 6-3, 210-pound goalkeeper who became the face of the U.S. men’s national soccer team prior to this summer’s FIFA World Cup. He sports a full, dark beard, menacing brown eyes, a shaved head and—perhaps not as noticeable for those unfamiliar with him—an upper body teeming with tattoos.

Howard’s first ink came when he was 16, a Superman symbol branded on his right biceps. Since then, he’s added so many tattoos now blanketing his torso and arms that he’s literally lost count. Let’s just say that, over the past few years, his frame has become a work of art.

Yes, Timothy Matthew Howard is comfortable in his own skin. But that hasn’t always been the case.

In a time and place far away from his current home in England, long before Howard became a worldwide sports celebrity and the starting goalkeeper for Team USA, Howard was just another boy growing up in the blue-collar community of North Brunswick, N.J. But young Tim had some strange behavioral tics. His mother researched his symptoms and took him to specialists to determine his condition. Back then, with little research available, the initial diagnosis was mere hyperactivity. Eventually, however, doctors discovered Howard had Tourette Syndrome, a neurological disorder that causes a person to make repeated, quick movements and sounds that they cannot control.