SPLC: Upholding the right to due process for detained immigrants across the Southeast

SPLC: Upholding the right to due process for detained immigrants across the Southeast 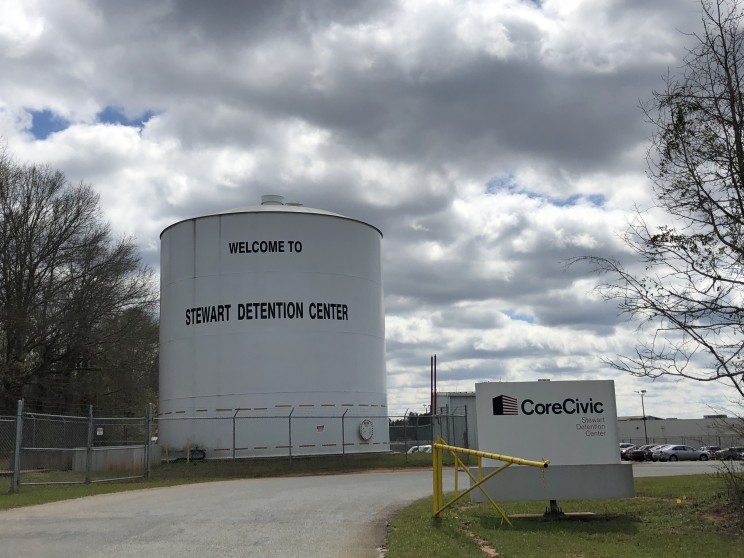 Every day, people from across the world come to the United States hoping to find safety or a better life. Some travel for hundreds of miles, crossing through the borders of Nicaragua, Honduras and Guatemala before reaching the U.S.-Mexico border. Others take planes from Bangladesh, Nigeria or Venezuela to seek asylum.  But, for most, their dreams are quickly dashed. Instead of finding refuge, they’re locked up in remote detention centers, alone and separated from their loved ones.

Many other immigrants have lived and worked in our communities for years but suddenly find themselves thrown into detention centers that differ from prisons in name only.

While incarcerated, many of these immigrants are subjected to poor nutrition, medical neglect, dehumanizing treatment and other forms of cruelty. In some cases, they’re forced to perform work that pads the profits of private prison companies, just so they can buy basic necessities from a prison store.

Unlike criminal defendants, immigrants are not entitled to an attorney at the government’s expense. And, since many can’t afford lawyers, they’re forced to represent themselves in deportation or asylum hearings that are already stacked against them. In fact, the judges in the immigration system are not independent, like those in state or federal courts. Rather, they work directly for the U.S. Justice Department, making them subject to the political dictates of the Trump administration, which is intent on deporting as many migrants as possible.

Some immigrants are forced to live behind walls and barbed wire for months – even years – for the day they might be released or deported.

In 2017, the SPLC launched the Southeast Immigrant Freedom Initiative (SIFI) to provide free legal counsel to immigrants detained in the Deep South. Today, SIFI has legal offices operating at four large detention centers in Georgia and Louisiana, where immigrants face some of the nation’s toughest immigration judges. Studies have shown that immigrants who have a lawyer are ten-and-a-half times more likely to succeed in their cases.

SIFI’s mission is to safeguard the civil and human rights of immigrants. Fairness and due process are American values that should hold true for all, regardless of one’s political views.

SIFI lawyers are helping people like Juan Carlos Herrera-Zapata, a gay man who fled his native Honduras to escape persecution there. When he sought asylum in the United States he was taken to the Folkston ICE Processing Center, a prison for immigrants in Georgia. Life there, he said, was bleaker and more difficult than it ever was in Honduras.

Juan Carlos was fortunate, though, because the SIFI operates an office in Folkston and offered free legal help.

This past January, he was granted asylum, becoming one of the fortunate few whose pleas for help are answered by immigration judges overloaded with cases in a broken system.

Last summer, as the country recoiled from the news that children were being separated from their parents and held in cage-like enclosures at the border, SIFI staffers helped reunite a desperate father with his 3-year-old son. Jose, fleeing violence in Honduras, had presented himself at an official U.S. port of entry in Texas. But even though he sought asylum legally, he was locked up, and his son was taken from him.

Fifty-four agonizing days later, after a court ordered the administration to reunite children with their parents, SIFI brought the two together again. The little boy, Josecito, was clearly traumatized by the ordeal. But both were overjoyed to be together again. “God bless you, God bless you!” Jose kept saying to SIFI staffers.

Morena Vasquez, another SIFI client, was detained at Irwin County Detention Center in Ocilla, Georgia, after living in the United States for 23 years. A mother to four children, she worked as a housekeeper. In February 2017, she was separated from her family and sent to a detention facility after a traffic stop. She prayed for an angel to deliver her from what seemed like a hopeless situation. SIFI secured her release a year later, and she was reunited with her children.

This work is emotionally difficult for SIFI staffers and the many lawyers, paralegals, students, interpreters and others who have volunteered their time to help those in need. Their clients are not drug dealers, gang members or “rapists,” as President Trump has claimed. They are ordinary working people who are trying their best to provide a good future for their families.

One law student from North Carolina, who spent a week as a SIFI volunteer in Georgia, wrote about finding herself in tears when she returned home. Some of the people she met had been imprisoned for months, some for years, and every single one had a “difficult, human, heartbreaking story.”

Through the heartbreak, however, she found inspiration in the people helping these migrants through SIFI: “There are some really amazing, inspiring, kind, wonderful individuals who work so hard to make sure these human beings who are being kept in detention – for doing nothing wrong except not having immigration status when they asked for asylum – are still able to feel like humans, and to be treated as such. There are some really incredible people, working out of small, modest spaces in small, modest towns, who are doing this kind of work every day, and will never be recognized even close to as much as they deserve for answering this call to action.”