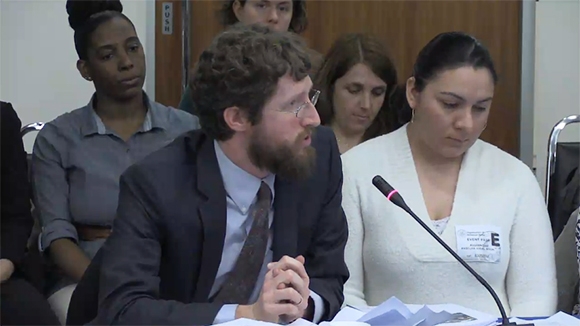 The human rights of U.S. meat and poultry workers are being routinely violated in plants where workers suffer crippling injuries because of excessive work speeds allowed by the federal government, the SPLC testified today before the Inter-American Commission on Human Rights (IACHR).

During his testimony at an IACHR hearing in Washington, SPLC staff attorney Tom Fritzsche called for the government to enact work-speed protections and to abandon a new regulation proposed by the U.S. Department of Agriculture (USDA) to increase poultry evisceration line speeds.

“The meat and poultry processing industries violate the fundamental human rights of their workers, who come from all over the hemisphere, by systematically exploiting the lack of work speed safety regulations in the United States,” Fritzsche testified. “The U.S., in turn, negligently permits these industries to inflict disabling harm on thousands of their employees.