After years of propagandizing, neo-Nazi Frazier Glenn Miller is accused of a triple murder. The violence was a long time coming. 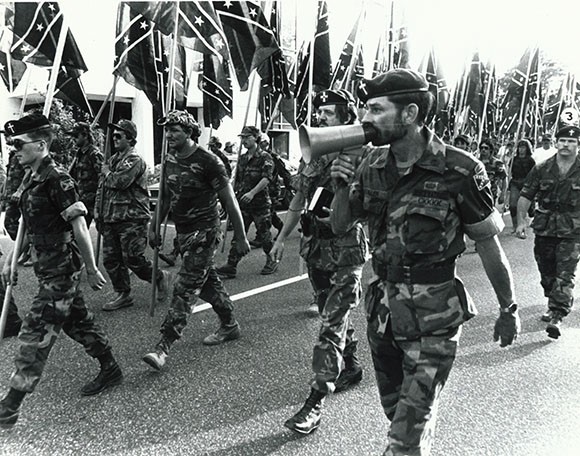 MARIONVILLE, Mo. – The troubled Miller boys are buried side-by-side, a few yards from the two-lane blacktop that cuts through the middle of the cemetery on the edge of this small country town. Each brother met a tragic end at an early age. One perished in a ball of flames, the other in a shootout with the law. Yet, even in death, their father, Frazier Glenn Miller, the notorious neo-Nazi and now triple-murder suspect in this spring’s Jewish community center terrorist attacks in Kansas, will not allow his sons to rest in peace. Engraved on their matching gray headstones is “88” – the numerical symbol for “Heil Hitler.”

Miller’s right-wing politics, prayers and delusions are all over the polished granite stones, which proclaim his sons to have been young “Saxon Braveheart” rebels who “Ride Now Forever” with the “Valkyrie Angels in the Heavens.”

Mike, the youngest and wildest Miller brother, the one who tried hardest to please his daddy, was the first to take the ride. He was killed in 1998 in a fiery car crash. He was just 19 and not long out of prison for committing a racially motivated arson. In the middle of a winter night, when he was 17, Mike had lobbed a Molotov cocktail into the back of a trailer home, filled with sleeping people, including, most disgustingly, according to his father’s twisted life’s lessons, a young black man and his white girlfriend.

Jesse, a year older than Mike and in possession of a calmer spirit, died a decade later in what the Lawrence County Sheriff describes as an Old West shootout. Jesse was driving with his mother to put flowers on his brother’s grave, got into a car accident, and inexplicably shot to death a man who stopped to help. He then went marching towards town, brandishing a shotgun. When a Marionville police officer arrived, Jesse shot him, too. The officer survived and returned fire, killing Jesse, who died along the side of the road.

“I think a lot of it had to do with their upbringing,” the sheriff, Brad DeLay, told Hatewatch. “To me they kind of appeared to be Frazier’s muscle men. If something were to happen, while we never could directly link it to him, you just had that feeling they were probably doing something that daddy wanted them to do or had talked about.”