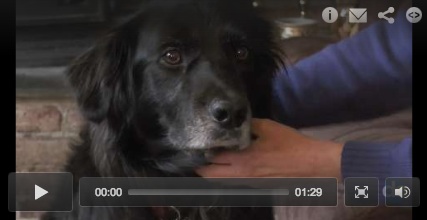 >> Watch the Video Above

Terri Lubaroff wishes she had a dramatic story to tell about her unusual service dog, Jackson, such as an incident when his presence meant the difference between life and death.

"That's the point," she said. "I don't have the drama because I have Jackson."

Lubaroff was diagnosed with Type I diabetes when she was 9 months old, during a time when pig and sheep insulin was used for treatment. Over the years, she tried many other options, like glucose-monitoring meters and diet management.

But nothing was able to regulate her blood sugar and prevent fluctuations that could cause her to pass out and possibly slip into a coma. Then, 10 years ago, Jackson came into her life.

Jackson is a service dog that can smell fluctuations in Lubaroff's blood-sugar level and alert her.

All dogs have a sense of smell that experts say is 10,000 to 100,000 times stronger than humans. Many can be trained to react to odors, including drugs, bombs, cadavers and high- and low-glucose levels.

At Canine Partners for Life, puppies that show potential are placed in homes where they are socialized and learn basic good citizenship.