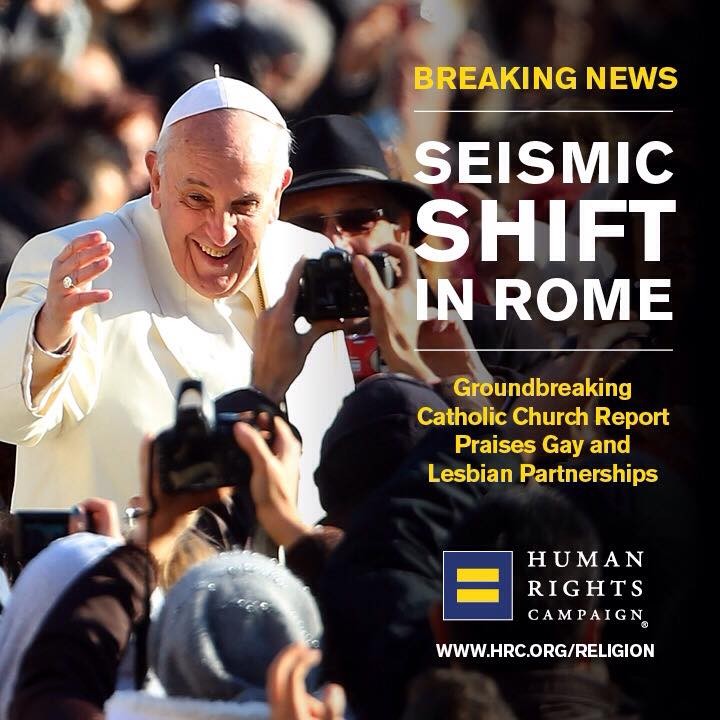 The preliminary but potentially ground-breaking document released today by the Extraordinary Synod of Bishops asserted that LGBT people have “gifts and talents to offer the Christian community,” and, for the first time, referred to LGBT couples as “partners” instead of sinners.

"For the LGBT Catholics in the United States and around the world, this new document is a light in the darkness—a dramatic new tone from a Church hierarchy that has long denied the very existence of committed and loving gay and lesbian partnerships.”

The new language comes at a time when many in the U.S. Catholic hierarchy continue to use heartless and derogatory language in referring to the LGBT faithful, while Pope Francis encourages a more compassionate approach.

The document, read today to the gathering, says that the Church does not view gay unions as on the “same footing as matrimony between a man and a woman.” But it goes on to assert the following: "Without denying the moral problems connected to homosexual unions it has to be noted that there are cases in which mutual aid to the point of sacrifice constitutes a precious support in the life of the partners."

Griffin said he hopes that the message coming out of the synod resonates well beyond Rome.