Reflections From the Bridge: Where the Stain of Slavery and Segregation Met a Young Man's Courage and a Preacher's Dream

Reflections From the Bridge: Where the Stain of Slavery and Segregation Met a Young Man's Courage and a Preacher's Dream 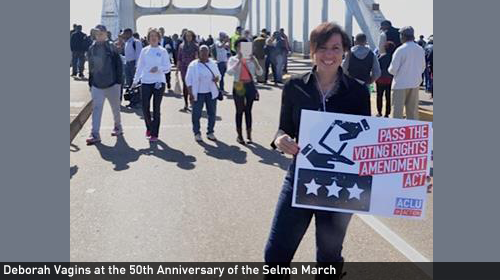 On March 7 and 8, ACLU joined more than 80,000 Americans in Selma, Ala. to commemorate those who marched and risked their lives in Selma 50 years ago. Their bravery led to the passage of the Voting Rights Act of 1965.

Being in this crowd commemorating this historic event left ACLU leaders reenergized for continuing the fight ahead. In the opening piece of this series, ACLU Washington Legislative Office Senior Legislative Counsel Deborah J. Vagins writes about the importance of securing voting rights for all citizens after standing in the very same place activists were beaten and bloodied by police 50 years ago. Tomorrow, ACLU Voting Rights Project Director Dale Ho will describe how voter suppression has re-emerged since 2008. And on Thursday the series will conclude with ACLU Racial Justice Program Director Dennis Parker, who will write about being inspired by the next generation of racial justice activists.

On March 7, 1965, voting rights supporters, led by Lewis and hundreds of activists, attempted to march from Selma to the state capitol in Montgomery to present then-Governor George Wallace with a list of grievances, demanding the fundamental right to vote for all. At this time, without strong federal legislation, state and local officials could merely circumvent court rulings striking down illegal voting tactics, with different, but equally discriminatory practices. Voting rights advocates began to push for a stronger set of tools, but resistance was fierce.