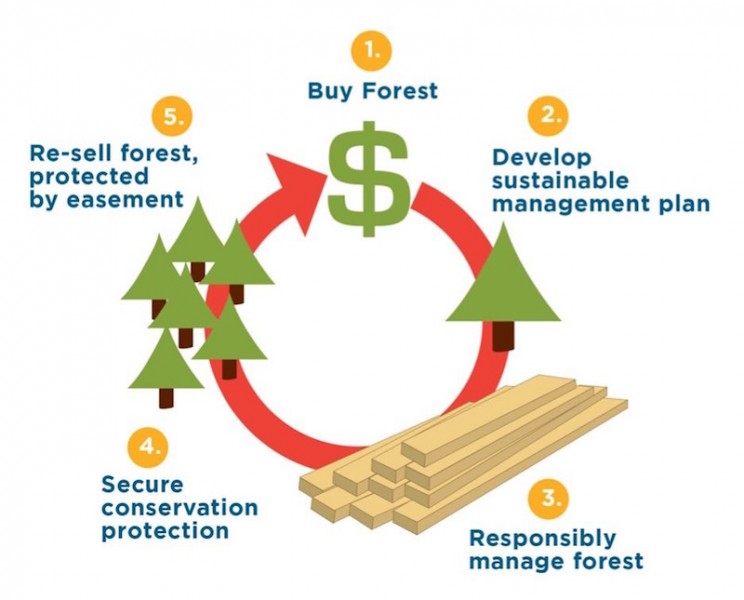 Did you know that the forest products industry employs nearly 2.7 million workers in the U.S.? Or that large, uninterrupted forests are habitat to 60% of the U.S.’s at-risk wildlife? Did you know that the security of America’s forestland has undergone a dramatic shift in the last 30 years?

Beginning in the late 1980s, America’s privately owned timberlands (which had been held and generally well managed by manufacturers as a steady supply of raw material) started to unravel. Why? Long-held, large forestlands became a liability amid pressures for increasing demand for liquidity and quarterly dividends. In response, companies sold off huge swaths of forests to the highest bidders. The buyers represented a new class of investors, insurance and pension funds, as well as university endowments.

Suddenly, America’s working forests were no longer viewed as a renewable resource but as an asset that should maximize returns. Timberland became a new “asset class” to be traded for the highest dollar.

Now, instead of managing forests for its health over the next 100 years, they are being managed for the highest short-term return value, typically 7-10 years. Land sold for its “highest and best use” is often broken down into smaller and smaller pieces. That has ripple effects on the forest products industries and local economies. Timber mills begin to shut down; logging and road construction jobs trickle away. Forest-dependent towns that were once thriving communities, often start to struggle as local government budgets and resources like hospitals, schools, and emergency services go underfunded because of shrinking timber revenues.

This “parcelization” has another very critical impact on the ecological attributes of large-scale forestlands nationwide. What we often take for granted—like clean water, clean air, recreational opportunities and wildlife habitat—are made possible by large, intact systems. As these complex natural systems are severed, the natural services on which we depend are diminished or eradicated, which is a loss for everyone.

The Conservation Fund’s response to the loss of America’s last big, intact, privately-held forests is our Working Forest Fund. Pioneered in 1998 to address this urgent conservation challenge, we acquire and permanently protect ecologically significant forestland, putting sustainable management plans in place to slow aggressive deforestation practices, and restore areas that have been depleted. The Conservation Fund has built a team of professional foresters, wildlife managers, and conservation experts to tackle this challenge. So far, we have permanently protected nearly 500,000 acres of working forest—including 3,236 acres in New York’s Tug Hill region, known as the Kendall Forest.

The Conservation Fund purchased the Kendall Forest in 2015 at the State’s and Town’s request and subsequently worked with local contractors to improve vehicular access. The State of New York recently took ownership of the property using a grant from the New York State Environmental Protection Fund— a state-wide funding source for capital projects that protect the environment and enhance communities.

The protection of Kendall Forest will help stem the tide of rural land division in the region, which typically costs towns more money in services than they receive in property taxes. State ownership of working forests is supported by towns because it helps retain traditional access and jobs while protecting town budgets. Check out this video on Kendall Forest and the work we’ve done here.

Support The Conservation Fund through your employee giving program:

As a donor, you can support The Conservation Fund by donating to them through your employer’s workplace giving program (CFC#​10630 if you're a military or federal employee participating in the Combined Federal Campaign). Payroll pledges made through employer-sponsored charitable giving programs represent a cost effective and near effortless way to support your favorite charities.

As The Conservation Fund's workplace giving partner, America’s Charities can help your company design and implement a program centered on supporting their work - through workplace giving campaigns, employee fundraising, cause-focused signature programs, volunteerism, donation drives, matching gifts, Dollars-for-Doers, In-Kind Giving and other employee engagement and philanthropic initiatives. Click here to request a demo and learn how we can help you do this.