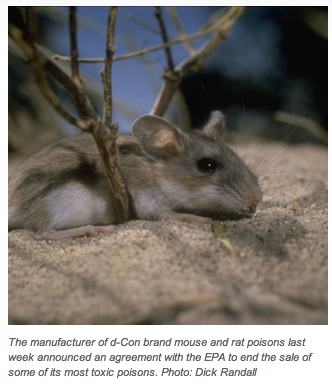 As collateral damage to our war on rodent “pests,” hundreds of children and thousands of pets are exposed to rodenticides each year, with many suffering serious illness or death – to say nothing of the slow, painful deaths suffered by the intended victims. In addition to being used extensively in and around our homes and businesses, these poisons are placed on federal lands, in state parks, in privately owned wildlife corridors, and in so many other open space areas, in order to kill mice, rats, ground squirrels and other small mammals who are thought to weaken levees, to infest structures, or to have some other adverse impact.

On Friday, we were excited to learn that Reckitt Benckiser Inc., the manufacturer of d-Con brand mouse and rat poisons – and the sole holdout against U.S. Environmental Protection Agency (EPA) requirements to make rat and mouse poisons safer— announced an agreement with the EPA to end the sale of some of its most toxic poisons. Under the agreement, d-Con can continue to sell the poisons – called second generation anticoagulant rodenticides, or SGARs – until the end of the year, although we urge retailers to remove these harmful products from their shelves immediately.

So many different wild animals are at risk from these poisons, including predatory birds and mammals who feed on so many rodents in order to survive.  Of course, these natural predators are the best rodenticides around, and when we poison them incidentally by setting out these toxins for other species, we engage in a self-defeating exercise.

For many years now, The HSUS’s wildlife department had been working with the EPA and non-government organizations to push for ending the use of SGARs and other toxins that hurt animals. Among other victories, we have fought for and won restrictions from the EPA on the use of Avitrol bird poison, a nervous system toxicant that was also dangerous to mammals and other animals.