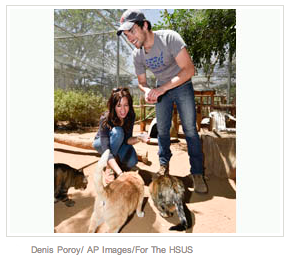 During his tour, Ian helped release a red-tailed hawk who was found struggling on the ground, and has been in rehabilitative care since early May. The bird’s ailments were a mystery, but after a few days of fluids, food and recuperation, he was able to be released into the center’s aviary to build wing strength in preparation for his return to the skies.

"They're doing amazing work here at The Fund for Animals Wildlife Center...