Pets soothe the spirit, strengthen the heart at Montgomery Hospice

Pets soothe the spirit, strengthen the heart at Montgomery Hospice 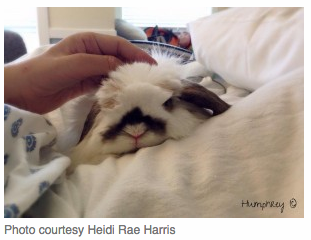 Elise Gordon Rasmussen has a full-time job, a sideline business and a family. But stress melts away when the Silver Spring resident is greeted by her four cats.

The bond between humans and animals is ancient. As reported in American Scholar in November 2011, a burial site discovered in Israel contains the 12,000-year-old bones of an elderly human.

The skeleton’s left hand embraces, with unmistakable affection, the bones of a puppy.

Rasmussen’s observation that pets bring physical and emotional benefits is supported by research. An article in the April 2012 issue of the American Journal of Cardiology, for example, states that pet ownership is associated with reduced heart disease.

Research seems to indicate, said Dr. Jay Mazel of Silver Spring, a cardiologist with MedStar Cardiology Associates, that pets are among the lifestyle measures that diminish stress and anxiety, which in turn may lead to a reduction in cardiovascular events.

“There are studies that suggest that pets, especially dogs, may offer protection from cardiovascular disease by lowering blood pressure, cholesterol and triglycerides,” said Mazel.

An extra health boon is the fact that dogs must be walked—which assists pet owners to achieve recommended levels of physical activity.

“Dogs are a motivator for exercise and can help control obesity,” said Katz.

Then there’s the camaraderie one may find when walking a dog or just “talking pets” with others who share the love. Loneliness may be lower among pet owners because of the sense of purpose and companionship in taking care of an animal.

Fewer doctors’ visits are noted among seniors with pets, as older people may make appointments to combat loneliness, Katz said.

On the other end of the age spectrum, having pets is a “good way to teach children love and responsibility,” noted Dahlia Topolosky, a licensed psychologist in Rockville. “Studies demonstrate that pet owners are in better emotional health, as indicated by tendencies toward greater self-esteem, sense of belonging and meaning.”

Even children with sensory issues, who have a hard time integrating sensory input, benefit from having and caressing animals, Topolosky added.

Although many people think furry when they think pet, other animals provide physical and psychological benefits. “You will notice beautiful fish tanks at many doctors’ offices—especially dental offices,” said Katz.  “This has a very calming effect on patients while awaiting their visits.”

That dogs can serve as eyes for the blind has been known for centuries. More recent is the training of service dogs to alert owners to medical issues, such as an epileptic seizure; to help calm veterans affected by post-traumatic stress; and to retrieve keys and perform other tasks for the physically disabled.

Though dogs are most commonly used in AAT, unexpected pets may qualify.
While buying bird food for her parrot, longtime animal fan Heidi Rae Harris of North Bethesda saw and “fell in love” with a rabbit and added him to her home.

Inspired by an article about therapy rabbits, she worked with an organization called Pet Therapy Unlimited to have Humphrey, the rabbit, certified. The two then visited pediatric patients in the Montgomery Hospice.