People With Down Syndrome Are Pioneers in Alzheimer's Research

People With Down Syndrome Are Pioneers in Alzheimer's Research 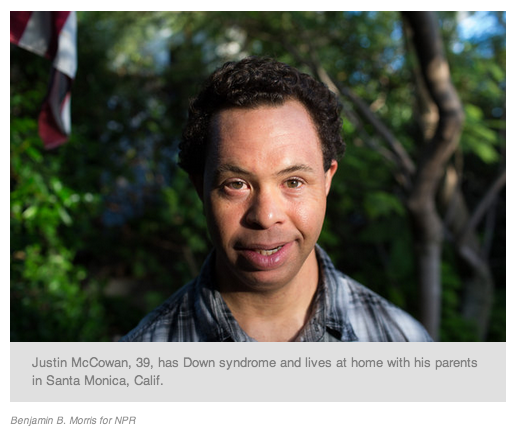 When researchers at the University of California, San Diego wanted to study an experimental Alzheimer's drug last year, they sought help from an unlikely group: people with Down syndrome.

"I had a CAT scan on my head, and I was in a special machine. It's called an MRI," says Justin McCowan, 39, whose parents drove him 125 miles from Santa Monica so he could participate in the study. McCowan also took brain function tests and spent hours with a needle in his arm so researchers could monitor levels of certain chemicals in his blood.

Alzheimer's researchers are increasingly interested in people like McCowan because "people with Down syndrome represent the world's largest population of individuals predisposed to getting Alzheimer's disease," says Michael Rafii, director of the Memory Disorders Clinic at UCSD.

Down syndrome is a genetic disorder that's best known for causing intellectual disability. But it also causes Alzheimer's. "By the age of 40, 100 percent of all individuals with Down syndrome have the pathology of Alzheimer's in their brain," Rafii says.