Paralysis May Not Last Forever Anymore

Paralysis May Not Last Forever Anymore 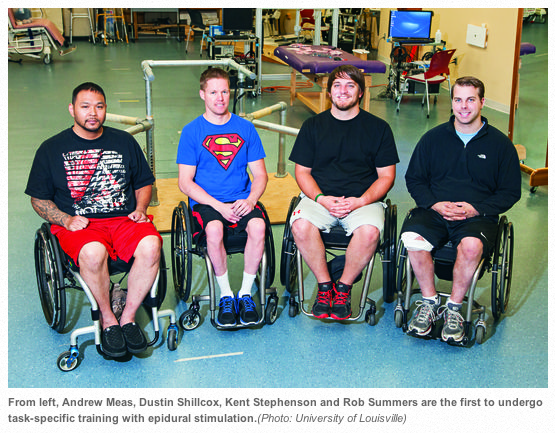 Paralysis may not last forever anymore. In an experiment hailed as "staggering," a team of researchers at the University of Louisville and the University of California-Los Angeles restored some voluntary movement to four men who were told they would never move their legs again.

The finding, published online today by the journal Brain, upends understanding of the spinal cord and is likely to transform the lives of more than 1.2 million Americans who lack control over their lower limbs.

"The message here is that patients with spinal cord injury may no longer necessarily say it's a sentence of complete, permanent paralysis," said Roderic Pettigrew, director of the National Institute of Biomedical Imaging and Bioengineering, the federal agency that helped fund the research. "Spinal cord injury is devastating, but now there is hope."

By coursing an electrical current through the four men's spines, the research team, which included scientists from the Pavlov Institute of Physiology in Russia, appears to have "dialed up" signals between the brain and legs that were believed to have been completely lost.

All four men, after being paralyzed for two to four years, can lift their legs, flex their ankles and support their own weight while standing, though only when the device embedded under their skin is turned on.

In a response that shocked researchers, all four have regained bladder and bowel control, sexual function and the ability to regulate their blood pressure and body temperature – even when the epidural stimulation device is not running.

It's those seemingly simple improvements that Kent Stephenson says have given him his life back.