Odyssey Ball has John Wayne and J.R. Martinez in the spotlight

Odyssey Ball has John Wayne and J.R. Martinez in the spotlight 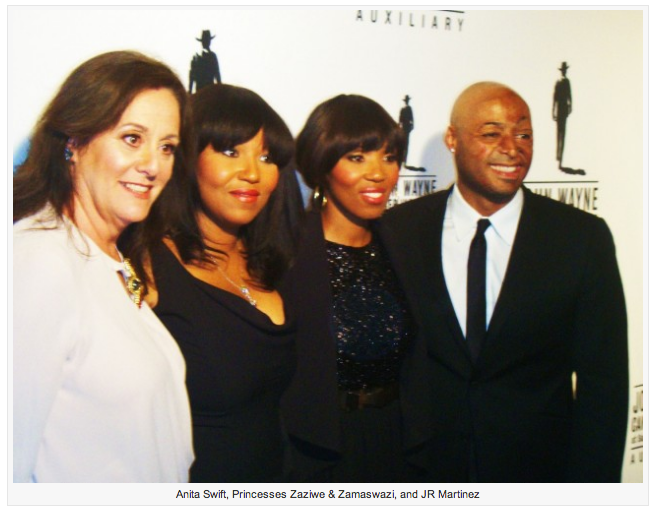 John Wayne said, “Courage is being scared to death but saddling up anyway.” So when Dancing With the Starschamp, actor, author, motivational speaker, and U.S. Army veteran J.R. Martinez hosted the John Wayne Cancer Institute Auxiliary’s 29th Annual Odyssey Ball, he reminded everyone, “That’s what cancer survivors do every day.” Actually, the JWCI supporters at the Beverly Wilshire already knew that, with many doctors and their ground-breaking research teams in attendance.

All on hand knew J.R. Martinez was the perfect person to host and talk about courage. Well-informed, funny, and so likable he was getting hugs from everyone in-between dinner courses, J.R. launched the event by noting, “John Wayne remains a cinematic icon 35 years after his passing. He’s always named among people’s favorite actor, generation after generation. But ‘The Duke’ knew the real measure of a man is what he did off screen, and we can all learn from his example.”

Having “true grit” in his own DNA, J.R. is an inspiring example as well. “I always dreamed of being a high school football hero. I got injured, but my senior year I finally got to play in the state championship game. After high school I joined the Army, and in 2003 I was deployed to Iraq. Less than a month later my Humvee hit a roadside bomb. I suffered severe burns on more than a third of my body—I’m sure you can’t notice,” he smiled as he told his story. “I underwent 32 surgeries in nearly three years. I realized then that I had gone through my own pain as a means to help others.” That was 11 years ago, and he told the Odyssey Ball crowd about his own odyssey of how he tries to help people go from being a victim to being a survivor. J.R.’s positive spirit infused the gala night.

“I’m happy to use whatever fame I have to give back. That’s a lesson we can all learn from John Wayne. It’s his John Wayne Cancer Institute that has become one of the most respected centers for research in the fight against cancer, and I’m proud to be here to honor Dr. Anton Bilchik and the family of beloved South African President Nelson Mandela,” he said.

Then J.R. introduced Anita Swift, John Wayne’s oldest grandchild and president of the John Wayne Cancer Institute Auxiliary, who said she was thrilled to have J.R. there “and I hope I get the first dance tonight.” Swift explained,