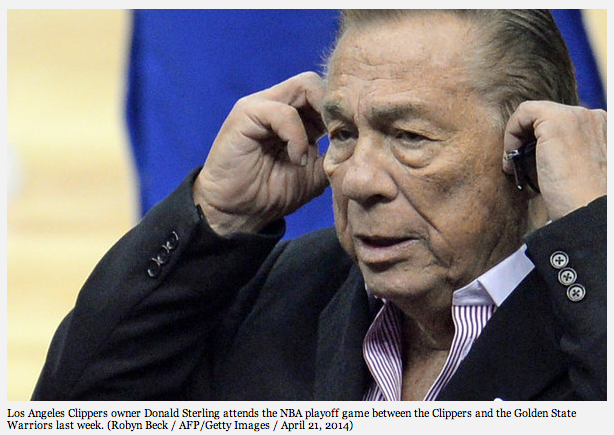 By Ruben Vives and David Zahniser

The National Assn. for the Advancement of Colored People announced Sunday that Donald Sterling will not receive an honor amid controversy over a recording said to be of the Clippers team owner making racist remarks.

The Los Angeles chapter of the NAACP had been scheduled to give Sterling the group's lifetime achievement award at its May 15 banquet.

"He is not receiving a lifetime achievement award from the NAACP," Lorraine Miller, NAACP interim vice president, told NBC's "Meet the Press."

Also, on Twitter, the NAACP announced Sterling "will not be receiving a lifetime achievement award from the LA Branch of the NAACP."

At the banquet, the NAACP chapter also planned to give its first "person of the year" awards to L.A. Mayor Eric Garcetti and the Rev. Al Sharpton, according to the organization's website.

Garcetti's spokesman had said Saturday that the mayor was going to talk to the NAACP about the honor.

"In light of recent events, we will be discussing this event with the Los Angeles NAACP," Garcetti spokesman Yusef Robb had said.

The comments that TMZ attributed to Sterling prompted ire among civil rights activists.

Earl Ofari Hutchinson, president of the Los Angeles Urban Policy Roundtable, and a coalition of civil rights leaders demanded that Sterling apologize for “blatantly racist remarks he reportedly made about African Americans. "Sterling's racist digs at African Americans is no surprise."

Hutchinson added: "Black players have made his fortune with the Clippers and for him to disparage African Americans is beyond reprehensible. It demands a public apology, a Clipper fan protest and NBA official censure."

The Clippers have released a statement saying that the team does not know if the man recorded is Sterling but that the comments do not reflect Sterling's "views, beliefs or feelings."

Garcetti said through a spokesman Saturday that he condemns the "statements and sentiments" attributed to Sterling. L.A. City Councilman Bernard C. Parks, who represents a portion of South Los Angeles, went further, saying the council should take a formal position denouncing the remarks and demanding action from the NBA.

The NBA said it is conducting an investigation.