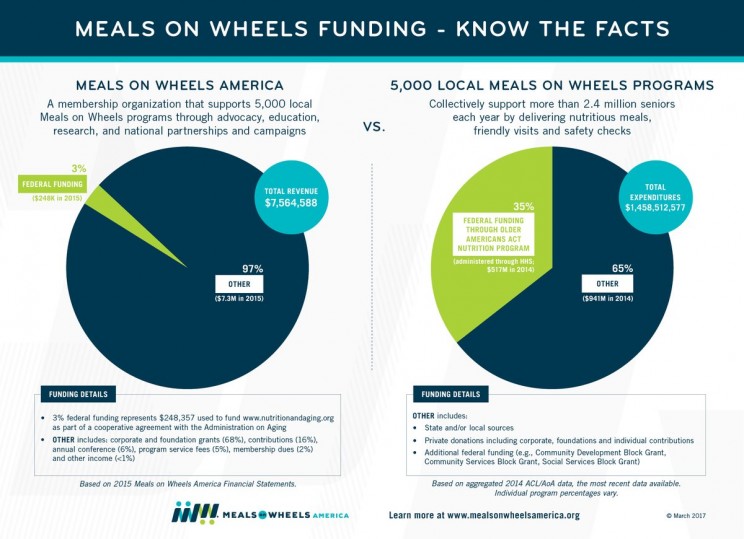 March 16, 2017 – Today, the President sent his Budget Blueprint, also known as the “skinny budget,” to Congress with a plan to release further details in the coming months. This blueprint focuses on discretionary spending levels for Fiscal Year 2018, and makes investments in defense programs, paid for through deep cuts to non-defense discretionary (NDD) programs, such as Meals on Wheels.

The portions of the President’s Budget that have been released so far call for the elimination of a number of federal programs, including the Community Services Block Grant (CSBG) and Community Development Block Grant (CDBG), on which some local Meals on Wheels programs rely to deliver nutritious meals, safety checks and friendly visits to our nation’s most vulnerable seniors.

Details on our network’s primary source of funding, the Older Americans Act, which has supported senior nutrition programs for 45 years, have not yet been released. This vital Act provides 35% of the total funding for Meals on Wheels (both congregate and home-delivered programs) nationally. With a stated 17.9% cut to the U.S. Department of Health and Human Services (HHS) budget, however, it is difficult to imagine a scenario in which these critical services would not be significantly and negatively impacted if enacted into law.

“The problem with a skinny budget is it is lean on details. So, while we don’t know the exact impact yet, cuts of any kind to these highly successful and leveraged programs would be a devastating blow to our ability to provide much-needed care for millions of vulnerable seniors in America, which in turn saves billions of dollars in reduced healthcare expenses” said Ellie Hollander, President and CEO Meals on Wheels America.

The need is growing rapidly, and federal funding has not kept pace. The network is already serving 23 million fewer meals now than in 2005, and waiting lists are mounting in every state. At a time when increased funding is needed, we fear that the millions of seniors who rely on us every day for a nutritious meal, safety check and visit from a volunteer will be left behind.

This successful public-private partnership, for which every federal dollar is matched with about three dollars from other sources, enables at-risk seniors to stay out of more expensive healthcare settings and remain more healthy, safe and independent in their own homes, where they want to be. After all, we can provide a senior with Meals on Wheels for an entire year for roughly the same cost of an average one-day stay in the hospital or ten days in a nursing home.