KINDness Spreads One Bite At A Time

KINDness Spreads One Bite At A Time 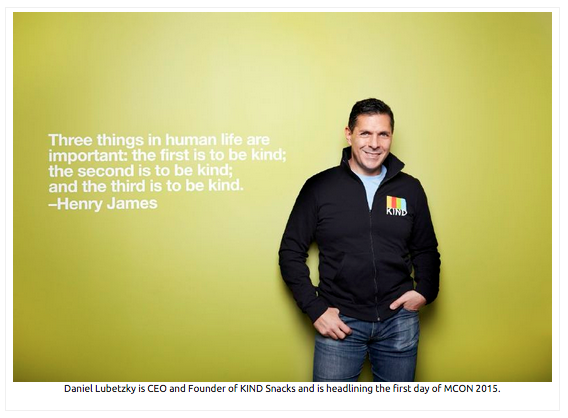 Every morning when I watch the news, I wonder who decided I need to know about every shooting, every hit-and-run, every barn fire that kills all the animals inside, every octopus that attempts – and fails – to escape its tank.

Where’s all the good news?

I just found it! All I had to do was follow #kindawesome.

Through this hashtag, you’ll be a part of the “moments that leave a mark and make the world a little kinder.” It’s a movement started by the people at KIND Snacks, founded by Daniel Lubetzky, who is #kindawesome himself.

Lubetzky is headlining the first day of MCON 2015, June 24-25 in Chicago. And he truly embodies the event’s theme: The Power of Influence.

And Lubetzky’s influence reaches farther and wider than TV news.

While he founded a company to make money, but he didn’t do it to get rich. He wanted to create a company that would encourage people to be nice to each other. He even named it KIND so that every product would carry the message.

And he leads by example. The company donates $10,000 every month to a cause. Now, that’s being kind.