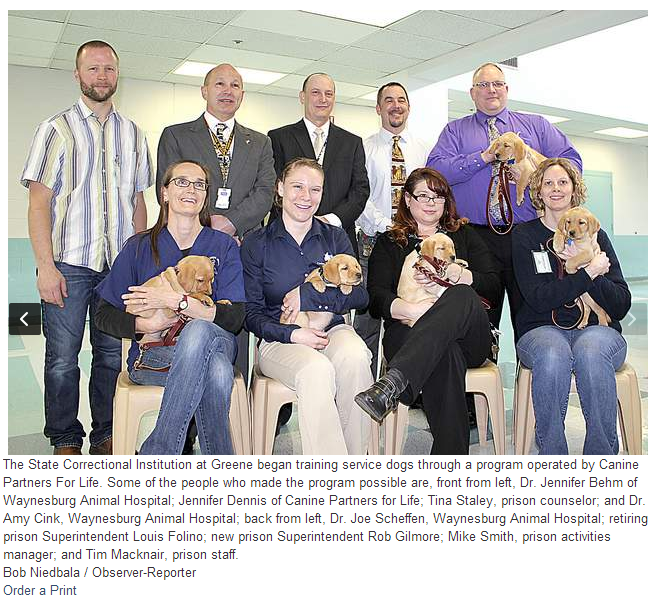 The puppies arrived early Wednesday afternoon at the State Correctional Institution at Greene.

The five, yellow Labrador retrievers were brought to the maximum security prison to begin their training, not to become guard dogs but to become dogs capable of assisting people in the community who have physical disabilities.

With the puppies’ arrival, SCI-Greene began its participation, in partnership with the nonprofit organization Canine Partners For Life, in a program to train certified service dogs.

The puppies’ arrival caused quite a stir at the institution. “Everybody is excited,” said Tina Staley, a prison counselor who worked on the committee to implement the program and who waited in the lobby with a number of staff for the puppies to arrive.

In the atmosphere of a maximum security prison, Staley said, “it brings something very positive.”

The puppies’ trainers will be inmates who were rigorously screened for the program. Eleven had volunteered and received instruction from the Canine Partners for Life staff, said Mike Smith, SCI-Greene activities manager.

At a brief ceremony to kick off the program, the inmates were introduced. Each thanked prison and CPL staff for being given the opportunity to be involved in the program. One said he believed he might be becoming an old “softy,” admitting he “teared up” when the puppies were brought into the room.

The program is good for CPL, which after a year will receive a dog with a certain degree of training, but also for the inmates, Smith said.

It will help instill them with a sense of responsibility and discipline and give them a little self-esteem, he said.

When the inmates were asked why they chose to be a part of this, “they said they wanted to be able to give back and provide a positive benefit to the community,” Smith said.

The inmates are all volunteers and will not be paid for their work. Being in the program is also a privilege, Smith said, and the inmates know if they break any rules they will lose the opportunity.