'I Have A Dream' Foundation Taps Porterfield for Lifetime Achievement Award

'I Have A Dream' Foundation Taps Porterfield for Lifetime Achievement Award

Source:
'I Have A Dream' Foundation 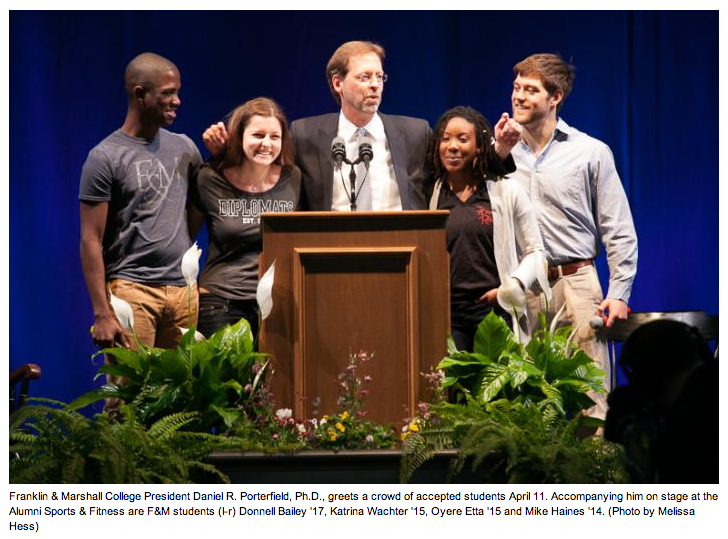 His national leadership calling on higher education to improve college access and opportunity for high-achieving students from underserved populations recently has earned Franklin & Marshall College President Daniel R. Porterfield, Ph.D., three invitations to the White House and prominent mentions in The New York Times. Shortly after graduation, it will carry him to New York City, where he'll receive the Eugene M. Lang Lifetime Achievement Award from the "I Have A Dream" Foundation at its annual Spring Gala on June 10.

Founded in 1986 by Lang, a successful New York businessman who drew national acclaim for his promise five years earlier to a group of then-sixth-graders in East Harlem to pay their college tuition if they graduated from high school, the national "I Have A Dream" Foundation aims to motivate and empower children from lower-income communities to reach their education and career goals by providing a long-term program of mentoring, tutoring, and enrichment along with tuition assistance for higher education. During the past three decades, more than 200 "I Have A Dream" programs have operated in 29 states, Washington, D.C., and New Zealand, helping more than 15,000 "Dreamers" surmount obstacles to achieve higher education and pursue fulfilling careers in teaching, social work, sports, music, law, administration, and many other fields.

Still active -- at age 95 -- as the Foundation's chairman emeritus, Lang said, "We are thrilled to honor Dr. Daniel Porterfield at this year's Spirit of the Dream Spring Gala. His determination to provide students with the opportunities, support and other resources needed to get to and through college captures the essence of the 'I Have A Dream' Foundation's vision."