Giving That Gets Results Blog Series

Giving That Gets Results Blog Series 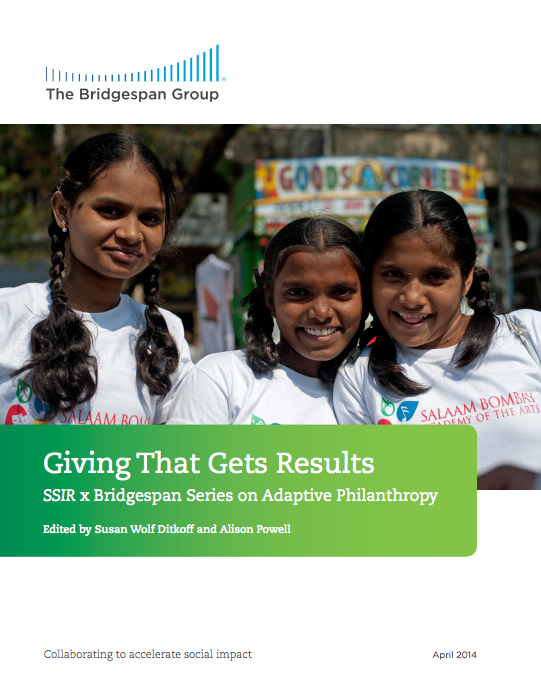 John is from the school of strategic philanthropy. The foundation he works for has four defined program areas, and he's the head of climate change. He has a well-thought-through theory of change pinned to his office wall, and his team spent nine months refining its highly detailed three-year strategy with clear metrics for success related to each activity. His foundation has three-year grant cycles, and he tries to help his grantees gain sustainable funding in the interval. But even as the board was voting to approve this new strategy, he heard rumblings of a new referendum at the state level that could have a tremendous effect on state funding to his grantees. When it passed, he couldn't react because his funds for the year were spent; even if they weren't, he didn't have the six to eight weeks required to write up detailed new proposals for the board.

Maria considers herself an "adaptive philanthropist." She cares about poverty and has read the research linking various interventions (such as an extended school day with high-quality programs) to gains in student achievement. When grantees come in for meetings, they know they can scribble notes on the theory of change she has tacked on the wall and pose pointed questions about assumptions she's making. Learning and updating her theory with new information is one of the most important things she does. She too has a scorecard of progress, but it's against higher-level outcome indicators rather than specific implementation activities. When a new funding proposal started floating around city hall, she used her flexible capital to help grantees pursue scenario analysis in case the new funding comes to pass. Then, she and her board agreed to increase the organization's allocation to help support passage. When it passed, she and her grantees were poised to seize the opportunity.

Despite the radical reset of the economy and political stalemate, John's foundation's approach is increasingly irrelevant. Most philanthropists haven't stick to the old model—a rigid plan that they desperately try to follow despite the fact that it won’t work anymore—or they find themselves lurching from grant to grant, slipping back into old, opportunistic habits and making a disconnected set of grants that don’t add up to anything.

Adaptive philanthropy, on the other hand, relies more on decision trees and scenario analysis than on rigid multiyear plans that, themselves, take years to evaluate and months to refresh. It takes just as much analysis, but the analysis is dynamic, not static. Adaptive philanthropists are highly oriented toward the external environment, keeping an eye on important sensitivities and assumptions versus executing what they wrote months ago.

Adaptive philanthropy is one of the more interesting developments in the field of philanthropy. Over the course of eight weeks in the late fall of 2013, SSIR and Bridgespan presented Giving That Gets Results (www.ssireview.org/effective_philanthropy), a series of blogs, videos, and webinars that explored adaptive philanthropy, and other important approaches to philanthropy.