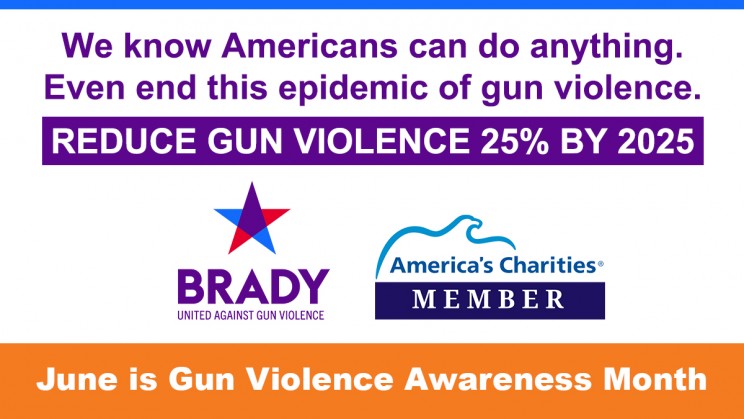 One silver lining to the COVID-19 pandemic is the number of mass shootings in the U.S. plunged 24% in April from a year earlier as churches, malls, restaurants, schools and parks were shuttered and most businesses closed, according to a Bloomberg News analysis. Unfortunately, the ongoing pandemic has converged with an ongoing crisis - our nation's gun epidemic: everyday gun violence, violence that results from domestic abuse, suicides, racial injustice, hate crimes against the LGBTQ community, and unintentional shootings.

Every day in the United States, over 300 people are shot, 103 of whom are killed. Data analyzed by Guns Down America from the Gun Violence Archive shows that nationally, fatalities from gun violence increased 14 percent in the first two weeks of April this year compared to the same period last year. Firearm fatalities rose by over 10 percent when compared to the first half of April 2018.

The United States is the only industrialized nation that faces these levels of gun violence, underscoring that this is a uniquely American but solvable problem.

Gun Violence Awareness Month is a time to promote greater awareness about gun violence and gun safety, bringing citizens and community leaders together to discuss how to make all of our communities safer, and put an end to people being hurt and killed by guns. Leading this charge is America's Charities' nonprofit member, Brady Center to Prevent Gun Violence.

The Brady Center to Prevent Gun Violence reduces gun violence using a tripartite strategy that incorporates litigation, legislation, and education. Brady's strategy focuses on the common ground shared by most Americans: we need to keep guns out of the hands of those who would use them to harm themselves or others. They accomplish this through three campaigns that:

Click here to learn more about how Brady Center to Prevent Gun Violence is working to protect all Americans from guns and what you can do to help.

This June, you can participate in Gun Violence Awareness Month in a number of ways, including:​