The Definitive Guide to a Successful Capital Campaign

The Definitive Guide to a Successful Capital Campaign 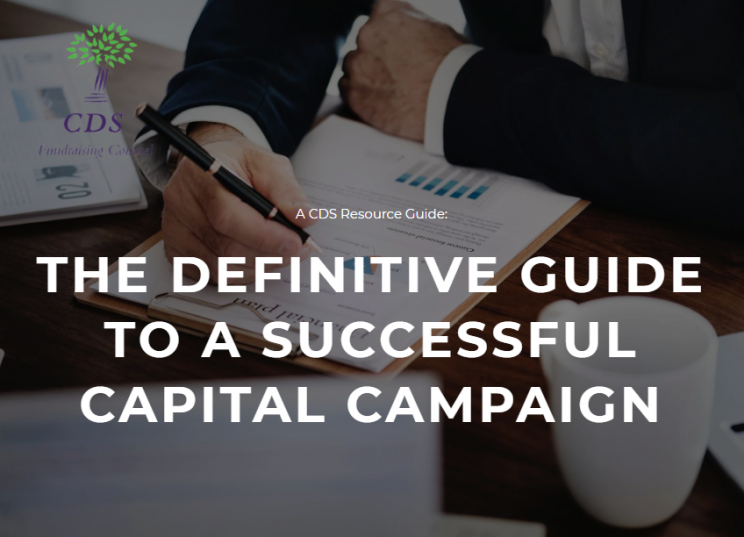 What is a Capital Campaign?

A capital campaign is an important tool for a nonprofit corporation, able to rally support from its board, staff and constituents.  It presents an opportunity to gain the approval and ownership from the organization's community to work towards raising a significant sum of money to achieve a specific goal or a series of goals.

Many people believe a capital campaign is only to be leveraged for bricks & mortar, or buildings and equipment, furnishings, etc., all of which are capital assets on the accounting balance sheet.  But, in fact, a capital campaign can be carried out to marshal the resources needed to accomplish many more goals than simply capital asset building or acquisition.

Campaigns can be mounted to fund many things, but most commonly they fall into one of these four categories:

It could be said that capital campaigns are more easily mounted for projects in the above order because people like to see buildings and permanent recognition of the work that they have done.  You can build it, sit in it, attend meetings in it and use it in a tangible way.  Programs and services capital campaigns are the next most easily accomplished, because donors know what will become available and they, or their friends, may in fact use this programs or services. For instance, a teaching and research hospital might offer you the opportunity to join a clinical trial for long-sought treatment of a dreaded disease.

Debt Reduction and Endowment Building are more difficult because people like to pay as they go; they don’t want to pay for yesterday’s folly or tomorrow’s foolishness.  Endowment campaigns are, however, typically looked favorably upon by many of the more conservative donors because they like to think that organizations to whom they give will be sustained, and do good into perpetuity.

How do Capital Campaigns Develop, and Why?

Every high-quality nonprofit corporation (like innovative for-profit corporations) is eager to strive to do more and better work, to meet their mission even more effectively.  Yet, frequently, there is not money in the operational budget to help pay for this innovation, improvement and achievement.  Thus, more money is sought to help realize dreams and vision.  Most nonprofits struggle to make the payroll, and to pay the bills.  With tight budgets, nonprofits often turn to capital fundraising campaigns to make the funds available to do extraordinary things.

For example, arts organizations are lucky if ticket sales, advertising and memorabilia sales fund 60 percent of their budget, so they are already having to raise 40% of their annual budgets in charitable gifts to sustain themselves. When they consider major improvements, there simply is no money to make them without the special dedicated effort of a capital campaign.  Whether the goal is to renovate a performance hall or to produce and pay for a new production, substantial funds are needed and must come from a purposeful effort to raise the money through a capital campaign.

The same can be said for a hospital or major medical center. Each year, they struggle to cover their costs for increasingly expensive patient care, cost for uncompensated care, and the other expenses such as amortizing the debt for the incredibly expensive equipment they have to purchase.  Patient payments and insurance payments often leave large gaps which profits will not cover.  Therefore, they must raise money through a hospital foundation.  Where does the hospital turn when they need a new wing for specialized heart care, or a cancer center or a new emergency room? Often the hospital's chief executive asks the hospital foundation if they can step forward and appeal to the community to make this investment with a capital campaign to raise the millions of dollars to help pay for these desperately needed facilities.

What about a major University, determined to raise its reputation in the research community by making a major investment in Cancer Research over the next decade? Budgets are tight, and it will cost millions of dollars to recruit the highly sought-after team of renowned physicians to build the team that will lead the research.  And, it will cost tens of millions of dollars for  the equipment they will need and the buildings in which to house it.  From where shall the money flow?  The University president has struck a partnership with a major pharmaceutical company who has pledged a $100 million challenge grant, which the hospital will match through a capital campaign seeking five year pledged gifts.

What are the Essential Elements of a Successful Capital Campaign?

Every successful campaign is built upon the foundation of four basic pillars - or the Essential Elements.

First, the Case for Support. This is the document that describes your organization and your current project. It answers questions:

The Case for Support, or Case Statement, will incorporate your project description. More importantly, it will tell your story - of your organization, of this particular project, and those you are and will be serving. Be specific in the usage of funds being raised. If your goal is $5 million, specify what that $5 million will accomplish - and also what you will prioritize if, for some reason, only $2 million or $3 million is raised. In addition to facts and figures describing need and intent, provide heartfelt stories and testimonies that illustrate those needs and put a face on those you serve. People don't give to facts and needs - they give to other people who will genuinely benefit from their generosity.

The other three of the four essential elements, as we define them, are: Leaders, Donors, and a Proven Campaign Plan, all of which are explored in depth on this page.