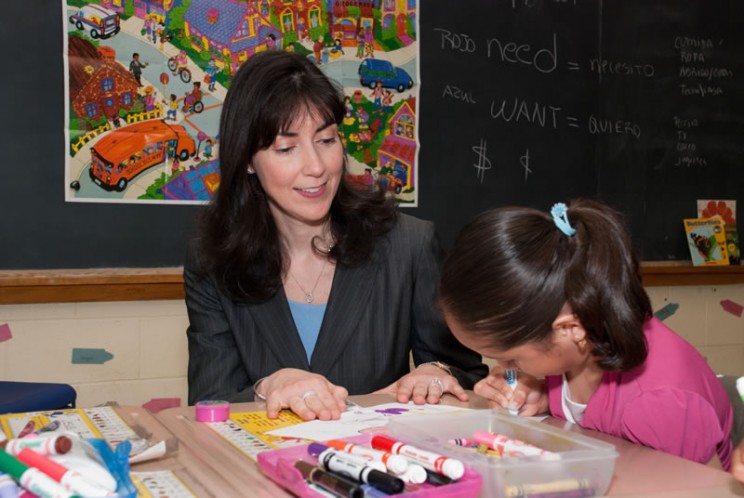 Young students from a suburban Chicago elementary school drew pictures of their morning with a special classroom visitor. On each page they commented on the stories that she had told them, the games they had played together and the things she had taught them, and bundled everything up into a handmade book.

When Baxter finance director Mayra Lugo received that book in a package delivered to her office, it warmed her heart. It was one of the best "thank you's" she had received during her more than 17 years of volunteer work with Junior Achievement (JA), a non-profit economics education organization dedicated to educating students about workforce readiness, entrepreneurship and financial literacy through hands-on programs.

"I realized that having someone from outside their school and homes is a big deal to them. They may not remember the entire lesson, but they will remember that someone came to their classroom, talked to them about the importance of school and gave them a perspective from the real world," she says.

Mayra has volunteered more than 1,000 hours to teaching financial literacy to Spanish-speaking students in kindergarten and first grade using curriculum from JA, an organization that Baxter has long supported. Originally from Puerto Rico, Mayra feels she has an obligation to use her Spanish fluency to teach bilingual students about the importance of staying in school, getting a good job, and being able to buy the items they need and want. Most of her teaching occurs in suburban Round Lake, Ill., where Baxter has a manufacturing facility. Round Lake also has a high proportion of Hispanic students, many of whom are also of Puerto Rican descent and are interested in Mayra's career journey at Baxter.

She adds, "Role models can play an important role in helping children envision different career possibilities and understand how financial concepts apply in their own lives. Starting at a young age is key for their development and for helping secure their financial future."

A longtime commitment to the organization
Baxter's involvement with JA spans the globe. During the 2012-2013 school year, more than 360 Baxter volunteers from Argentina, Brazil, Canada, China, Colombia, Ireland, Mexico and the United States, including many of the company's senior leaders, spent over 3,000 hours teaching financial literacy to more than 11,000 students through JA. During Mayra's 13 years at Baxter, she's played a big role in growing the program within Baxter's Northern Illinois facilities.