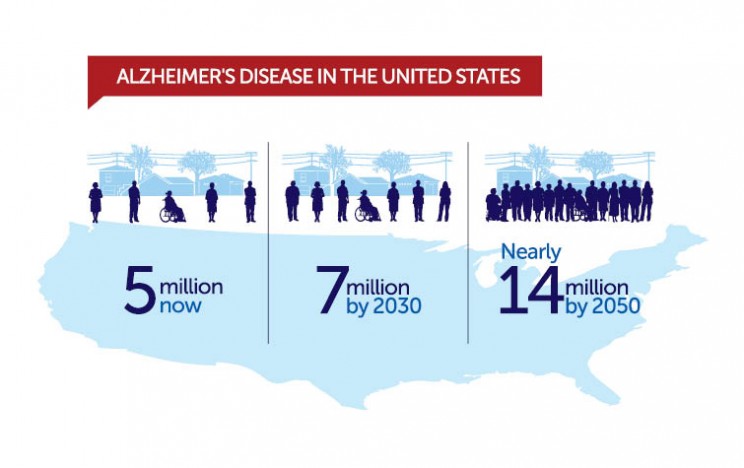 Alzheimer’s disease is the sixth leading cause of death in the United States, yet it is the only cause of death among the top 10 in America without a way to prevent, cure, or even slow its progression. It is an irreversible degeneration of the brain that causes disruptions in memory, cognition, personality, and other functions and inevitably leads to death. More than 5 million Americans aged 65 and older are thought to have Alzheimer’s disease. This number is set to grow dramatically, as baby boomers are turning 65 at a rate of 10,000 people per day. By 2025 that number will likely be 7 million, and it will rise to nearly 14 million people living with Alzheimer’s by 2050.

The disease ravages not only the physical and emotional health of the patient, but it can have a devastating toll on families and caregivers. The very nature of the disease, with behavioral changes and forgetfulness as primary symptoms, places increasing burdens on caregivers, who often must provide around-the-clock care for many years. Unpaid caregivers frequently experience high levels of emotional stress and depression, and commonly report a negative impact on their own health, employment, income, and financial security.

The economic cost to society as a whole can be just as devastating, as total payments for health care, long-term care, and hospice for people with Alzheimer's and other dementias are projected to increase from an estimated $214 billion in 2014 to $1.2 trillion in 2050 (in current dollars). This dramatic rise includes a 500% increase in combined Medicare and Medicaid spending.

Alzheimer’s Disease Research, with discovery, early-stage research at its core, is critical to funding the innovative ideas of researchers at the beginning of their career who are gathering preliminary data that one day may be the focus of large federal and industry funding. In other words, without major support of early-stage research, a breakthrough is almost impossible to occur.

Through the efforts of researchers worldwide we have come to a better understanding of this devastating disease, and Alzheimer’s Disease Research is committed to funding groundbreaking scientific research that may lead to a cure that can impact millions of people.

We have invested more than $93 million in support of the most promising new ideas in the field of Alzheimer’s research. This is a huge success when our average individual donation is only $29. With every donation we receive, whatever the amount, we are able to continue the fight to find a cure for this devastating disease.

If you or your company would like to support Alzheimer's Disease Research through an employee giving program, click here to learn about our corporate giving solutions and request a demo.

Our thanks to Alzheimer's Disease Research for sharing the importance of the work they’re doing. To learn more about their work, visit their website at www.brightfocus.org/alzheimers.