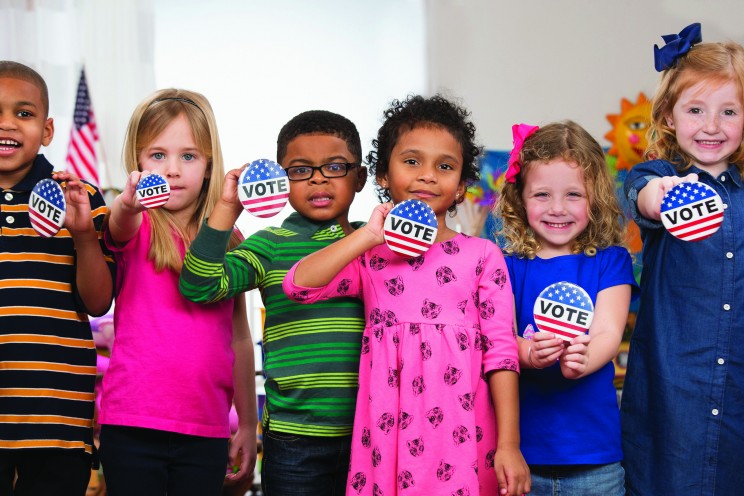 Every four years, teachers across America use the presidential election to engage children in our electoral process and teach them valuable lessons about our democracy, government and the responsibilities of citizenship.

But this year is different. 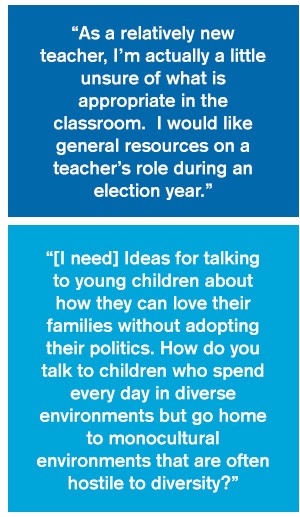 Many educators are finding themselves perplexed and deeply conflicted – torn between their responsibility to remain politically neutral and their concern about the language and the lessons that children may be absorbing from the campaign.

To help teachers navigate this difficult terrain, we’ve just released a set of online resources, and we’ll be adding more material throughout this election season. Our resources are designed to help teachers protect and reassure students who may feel targeted, engage young people in the election process, encourage civil discourse in school and address controversial issues.

We determined the need for these resources after we conducted an online survey asking teachers how their students are being affected by the campaign.

Given the tenor of the campaign and the themes involving immigrants and Muslims, what respondents told us was not terribly surprising. In our report, we concluded that the campaign is producing an alarming level of fear and anxiety, particularly among children of color.

Over two-thirds of the 2,000 educators who responded said that young people in their schools – most often immigrants, children of immigrants, Muslims, African Americans and other students of color – have expressed concern about what might happen to them or their families after the election. More than 500 comments contained the words “fear,” “scared,” “afraid,” “anxious” or “terrified.”

These are worrisome indicators; close to a third of students in America’s public schools are children of foreign-born parents.

One Latino boy, for example, was told by his classmates that he would be thrown out of the country. Every day, he asks his kindergarten teacher, “Is the wall here yet?” A teacher in a middle school with a large population of African-American Muslims wrote that her “students are terrified of Donald Trump. They think that if he’s elected, all black people will get sent back to Africa.”

What’s more, many teachers reported a rise in bullying and harassment of children of color, along with generally bad behavior that they attributed to the uncivil – and often juvenile – behavior of some candidates.

Many teachers seem to feel they need to make a choice between teaching about the election or protecting their kids. Among elementary teachers, half told us they have decided to avoid it.

In Arlington, Virginia, a teacher explained, “I try to not bring it up since it is so stressful for my students.” Even in high school, “I try to be more careful – rather than stoke the fires,” wrote one Utah teacher. In Kansas, a high school teacher sounded apologetic as she explained, “I bring it up twice a month out of obligation.”

Avoiding the issue doesn’t sit well with many educators, however. A New York middle school administrator who saw his staff “tiptoeing,” explained, “It is so inflammatory that no one wants to even discuss it. Not good when we should be talking about issues.”

We’re encouraging educators to continue teaching about the election, even with the difficulties that arise. Schools are sites specifically designed to teach about citizenship and civic engagement. And the opportunity to teach about a current presidential election only comes along once every four years.

We’d like to think that candidates aspiring to be president would maintain a civil tone. But we’re not counting on it. In the meantime, we’ll do everything we can to provide educators the resources they need to make our nation’s classrooms safe, equitable and inclusive learning environments.

Maureen Costello is director of Teaching Tolerance, a project of the Southern Poverty Law Center.

Support This Cause Through Workplace Giving:

Teaching Tolerance is a project of the Southern Poverty Law Center (SPLC). You can learn more about the SPLC's work, reports, and other projects by visiting www.splcenter.org. Your company can support the SPLC and help them continue making resources like this available by starting a workplace giving program with America's Charities. Our online giving technology and solutions can facilitate your workplace giving campaign and other company cause initiatives. America’s Charities has been mobilizing the workforce to affect social change through employee giving and other company philanthropic initiatives for over 35 years and we have raised more than $650 million of sustainable funds for more than 10,000 nonprofits as a result.