The Southern Poverty Law Center (SPLC) is dedicated to fighting hate and bigotry and to seeking justice for the most vulnerable members of our society. Using litigation, education, and other forms of advocacy, the SPLC works toward the day when the ideals of equal justice and equal opportunity will be a reality.

The SPLC is regarded as one of the world’s experts in monitoring racism, extremism, and hate groups. We publish our investigative findings online, on our Hatewatch blog, and in the Intelligence Report, our award-winning quarterly journal. We’ve crippled some of the country’s most notorious hate groups by suing them for murders and other violent acts committed by their members. All our publications are made available – free of charge – to the general public, journalists, scholars, human rights organizations, every member of Congress, and law enforcement officers across the nation.

We are the only organization that publishes an annual hate group list. All hate groups have beliefs or practices that attack or malign an entire class of people, typically for their immutable characteristics. 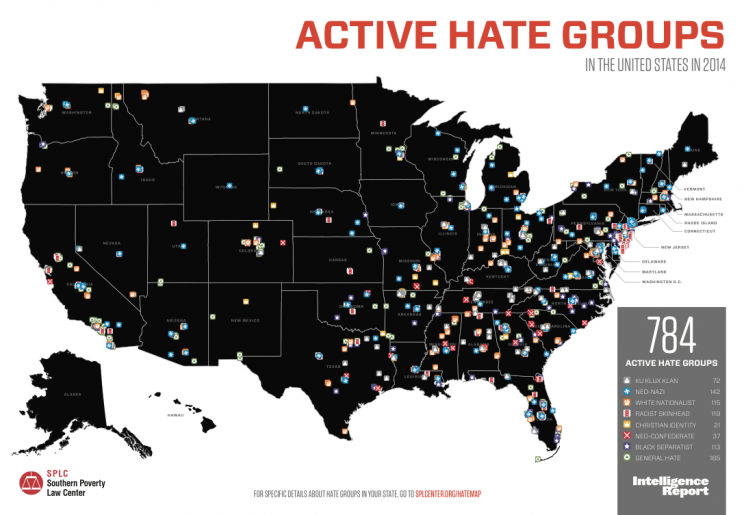 The hate groups listed include neo-Nazis, white nationalists, neo-Confederates, racist skinheads, Klansmen and black separatists. Other hate groups on the list target LGBT people, Muslims or immigrants, and some specialize in producing racist music or propaganda denying the Holocaust.

In our most recent census of hate groups, we found that despite a decline in the number of far-right extremist groups in the United States, terrorist plots and other acts of deadly violence committed by the radical right have not abated.

Yet, this decrease is deceptive. The reality is that hatemongers are migrating from organized groups to the anonymity of the Internet, places like Stormfront, the web’s largest hate forum. Its users have more than doubled since President Obama was elected.

Even more troubling is the fact that domestic terrorism and racist violence from the radical right continues at a high level. We found that the vast majority of these terrorist plots are hatched by “lone wolves” or pairs of extremists who don’t belong to any organization. Often, their racist rage is fueled by interactions on websites like Stormfront, the largest online meeting place for white supremacists.

Our most recent report shows that over the last six years, a domestic terrorist attack has occurred, on average, every 34 days. These leaderless attacks – the hardest for law enforcement to prevent – have  claimed 63 lives. They include longtime neo-Nazi Frazier Glenn Miller’s murder of three people during an anti-Semitic rampage in Kansas. We once sued Miller for operating an illegal Klan militia. He later went to prison in connection with a plot to kill our colleague Morris Dees.

You can read our new report here and see our latest interactive hate map showing the names, types and locations of 784 hate groups operating across America.

How you can help:

With your support, we’re doing everything we can to expose the activities of far-right extremists – and working with law enforcement at every level to combat potential domestic terrorists.

One of the best ways to support SPLC is to donate to us through your workplace giving program (or the Combined Federal Campaign if you're a Federal employee). If your employer does not have a payroll deduction campaign or does not offer the choice of giving to SPLC, ask about bringing America's Charities to your workplace.  America's Charities works with employers to develop employee-friendly, cost-effective workplace giving campaigns that benefit charities like ours.