ADVOCACY: Speaking Out on Policies That Count

ADVOCACY: Speaking Out on Policies That Count

Formed in 1909, by a multiracial group of progressive thinkers, the National Association for the Advancement of Colored People (NAACP) is a non-profit organization established with the objective of ensuring the political, educational, social and economic equality of minority groups.

As the nation’s oldest and largest civil rights organization, the NAACP has worked successfully with allies of all races who believe in and stand for the principles on which the organization was founded. We are represented in 2,200 branches and units all across this country in 50 states, in every large city, hundreds and hundreds of small towns, and in 60 global military installations, and always welcome new members and supporters.  With over 2.2 million digital activists, we have more young people in the NAACP than any other young person’s civil rights organization in the country combined.

Since 1909, it can be noted that NAACP members marched before marching for civil rights was an acceptable norm; successfully sued for fairness when no one thought to ask courts for equality; appeared before state and federal legislatures with compelling objections to racial abuses; helped internationalize the struggle for civil rights by lobbying the United Nations; and persistently insisted on equality in every aspect of American life in order to make the American charter a true contract of freedom. 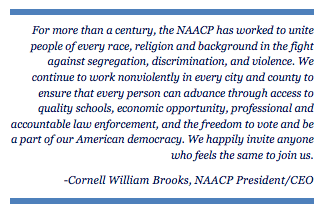 Through our 501c3 national infrastructure, the NAACP helps shape national, state and local policy through advocacy programs that build awareness and lays a foundation of understanding to promote vital changes in:

As a donor, you can support NAACP by donating to them through your employer’s workplace giving program (CFC#10355 if you're a military or federal employee participating in the Combined Federal Campaign). Payroll pledges made through employer-sponsored charitable giving programs represent a cost effective and near effortless way to support your favorite charities.

As NAACP's workplace giving partner, America’s Charities can help your company design and implement a program centered on supporting their work - through workplace giving campaigns, employee fundraising, cause-focused signature programs, volunteerism, donation drives, matching gifts, Dollars-for-Doers, In-Kind Giving and other employee engagement and philanthropic initiatives. Click here to request a demo and learn how we can help you do this.