A Bill for the One Percent – of Sport and Trophy Hunters

A Bill for the One Percent – of Sport and Trophy Hunters 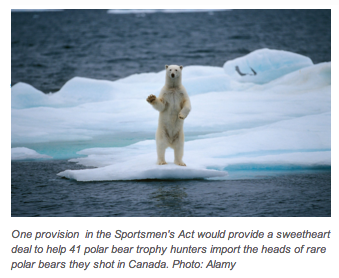 Just a few days ago, it was the 50th anniversary of the landmark Civil Rights Act. The act was the goal of the 1963 March on Washington and a year later it was muscled through Congress by President Lyndon Johnson and several key Democrats and Republicans. That was Congress at its best, doing something in the national interest and honoring the moral standards of our country.

That same year, Johnson signed into law another piece of landmark legislation – the Wilderness Act, which sought to preserve wild areas “where the earth and its community of life are untrammeled by man, where man himself is a visitor who does not remain.”

The Wilderness Act is about to be weakened by Congress, and there’s nary a howl, screech, or a primal scream about it.  Today, the Senate is scheduled to take up S. 2363, the so-called “Sportsmen’s Act,” which has three particularly odious elements to it and represents a giveaway to the National Rifle Association, Safari Club International, and others who represent the extreme wing of the Washington trophy hunting lobby. This is Congress at its worst, with Democratic leaders teeing up the bill to give a couple of southern Democrats – lead sponsor Kay Hagan of North Carolina, and Mark Pryor of Arkansas – a political talking point as they campaign in the rural areas of their states. The fact is, though, hardly one of the hunters whom Hagan or Pryor may run across will benefit much at all from any of these provisions of this bill.

One provision would roll back the Marine Mammal Protection Act and provide a sweetheart deal to help 41 polar bear trophy hunters import the heads of rare polar bears they shot in Canada.