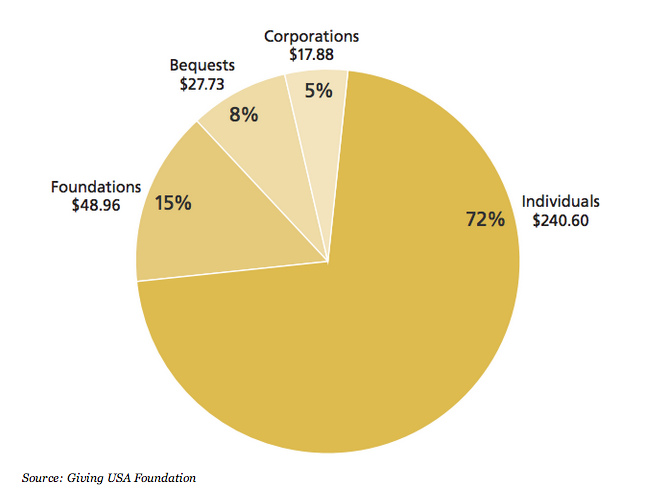 Those who don’t seek charitable donations for a living can usually be forgiven for one of the most common misperceptions in American philanthropy: that foundations and corporations represent the “big money” in nonprofit fundraising. They do not. Year after year, individuals in the U.S. are responsible, in the main, for contributing the steady 2% of GDP that constitutes giving in this country.

And as the U.S. nonprofit sector finally approaches levels of top line support not seen since before the Great Recession, it is once again American individuals powering that comeback, according to the annual analysis Giving USA: The Annual Report on Philanthropy produced by the Giving USA Foundation.

“We are seeing clear gains in the total amount given by individuals in the last couple of years,” said Gregg Carlson, chair of the Giving USA Foundation. “Of special interest is the rise in contributions by individuals between 2011 and 2013 – it represents 73% of the growth in total giving during that time frame.”

The single largest contributor to the increase in total charitable giving in 2013, over 2012, was an increase of $9.69 billion in giving by individuals (in current dollars). In other key highlights: