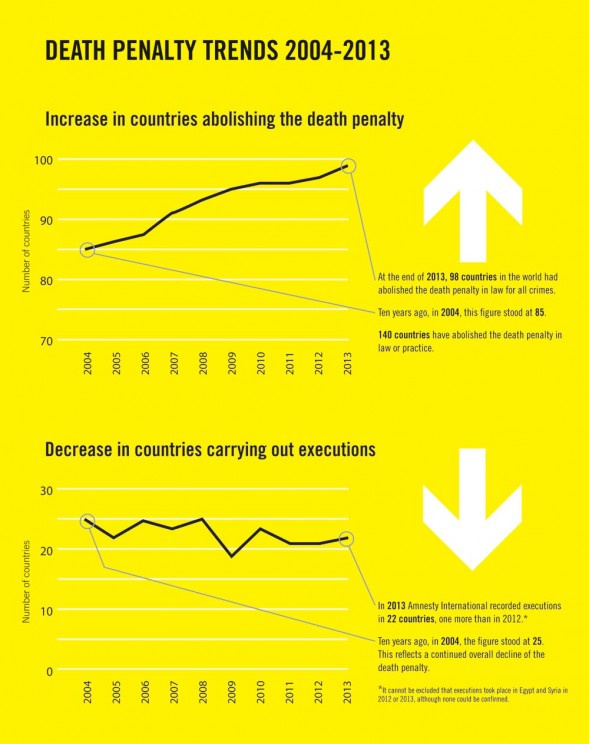 Amnesty International recently released its annual report on the Death Penalty, "Death Sentences and Executions 2013." 2013 was marked by some challenging setbacks on the journey to abolition of the death penalty. Four countries – Indonesia, Kuwait, Nigeria and Viet Nam – resumed executions and there was a significant rise in the number of people executed during the year compared with 2012, driven primarily by increases in Iraq and Iran.

Executions were recorded in 22 countries during 2013, one more than in the previous year. As in 2012, it could not be confirmed if judicial executions took place in Egypt or Syria. The overall number of reported executions worldwide was 778, an increase of almost 15% compared with 2012. As in previous years, this figure does not include the thousands of people executed in China; with the death penalty treated as a state secret the lack of reliable data does not allow Amnesty International to publish credible minimum figures for China.

Despite these worrying developments, the overall data demonstrate that the trend is still firmly towards abolition. Excluding China, almost 80% of all known executions worldwide were recorded in only three countries: Iran, Iraq and Saudi Arabia.

Progress towards abolition was recorded in all regions of the world. Although the USA remained the only country in the Americas to carry out executions in 2013, the number of executions in the country continued to decrease.