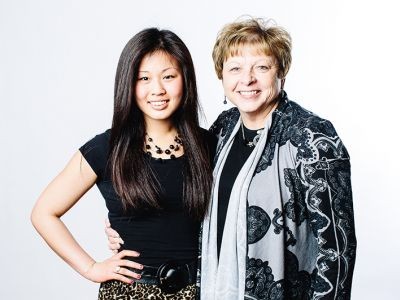 Stories of amazing transformations of Boys Town teens have surfaced over the years, and one impressive example is that of Anne Polland from Valley, Nebraska.

Starting at the age of four, Polland frequently displayed aggressive behavior and anger issues, which made home life challenging. When she lost control, her verbal and physical confrontations were often aimed at her mother and sister. “I was disrespectful to different authority figures and didn’t accept the decisions my mom made,” shared Polland. After years of therapy and ongoing difficulty, Polland’s mother, Pat, made the difficult, yet necessary, decision to send her to Boys Town in an effort to tackle her behavior head on.

Four years ago, then 14-year old Polland arrived at Boys Town to begin her freshman year, skeptical of how they could help her and resentful that her mother took such an extreme measure for her high school years. Polland was forced to adhere to the rules in place at Boys Town, and she was initially limited to just one weekend at home each month.

“Those who arrive at Boys Town come for many different reasons,” said Jody Skartnedt, a Family Teacher at Boys Town and Polland’s assigned parental figure. “The term ‘troubled’ can relate to various aspects of a youth’s life,” explained Skartnedt as she shared her observations related to her 15-year tenure at Boys Town. “It’s often considered a ‘second chance’ for many youth who have had previous struggles,” she continued. “Boys Town teaches helpful social and independent living skills needed to be successful in the future.”

Upon completion of her freshman year, Polland’s metamorphosis was well underway with a very noticeable change in her attitude and overall demeanor. Once considered sarcastic and lacking respect for others, she was now viewed as “bubbly and lively” by those at school. As a sophomore, Polland received her first validation of change when named captain of the girls volleyball team. The honor of being a captain was bestowed on her again in the spring for the girls’ soccer team. As her second year came to a close, her greatest achievement was earning the school’s Most Outstanding Sophomore award.