By BrightFocus Foundation on November 16, 2020

About 5.8 million Americans are living with Alzheimer’s disease today and are waiting for a cure. By 2050, close to 15 million will be diagnosed with this memory-stealing disease. BrightFocus Foundation believes supporting scientists’ bold ideas through our Alzheimer’s Disease Research program holds tremendous hope.

Every time you breathe, BrightFocus puts 31 cents towards Alzheimer’s Disease Research. Right now, we are funding 133 research projects around the United States and abroad, a more than $35 million investment in potentially game-changing discoveries.

Makoto Ishii, MD, PhD, of Weill Cornell Medicine leads one of these promising studies. He is shedding new light on why Alzheimer’s can lead to weight loss, particularly early in the course of the disease. 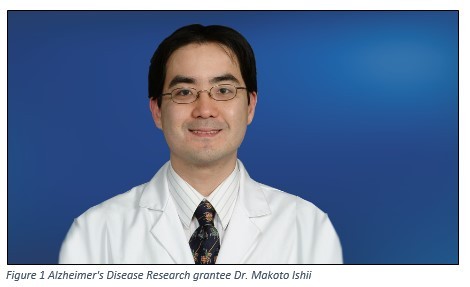 Ishii is running a clinical trial analyzing blood and spinal fluid samples from cognitively healthy volunteers who have the earliest pathological signs of Alzheimer’s and comparing those samples to healthy individuals who lack Alzheimer’s pathology. Through his research, Ishii hopes to explore new avenues for developing better diagnosis and treatment of the disease.

He has seen the awful impact of Alzheimer’s up close. When watching the progression of his grandmother’s disease, he not only noticed her loss of identity and independence, but also that she shed a significant amount of weight despite eating what appeared to be her normal amount of food.

“As a grandson, I feel at times helpless as my grandmother’s dementia continues to worsen,” said Ishii. “As a clinician-scientist, I see the potential advances we can make by exploring clinical observations that can help solve the complexities of Alzheimer’s disease.”

Ishii began his connection to BrightFocus by attending Alzheimer's Fast Track, its signature program to identify and train the most promising early-career scientists in the field.

Grateful for a grant from Alzheimer’s Disease Research, he aims to make, “a broader contribution to the large community of clinicians, research scientists, tireless family caregivers, and most importantly to the patients who are like my grandmother, all who are battling this devastating disease.”

If you’re a military or federal employee, you can support Alzheimer’s Disease Research through the Combined Federal Campaign (CFC). Our CFC number is 30518.

If you’re a private sector employee, you can also help fund Alzheimer’s Disease Research through your employer’s workplace giving program.

Click here if your company would like to start a workplace giving program to support Alzheimer’s Disease Research. We have partnered with America's Charities, a workplace giving federation, which connects employees to the causes they care about the most.

Through your generosity to BrightFocus’ Alzheimer’s Disease Research program, you can fund scientists’ projects and their careers:

To learn more about the research that you can help support, visit https://www.brightfocus.org/grant-search.