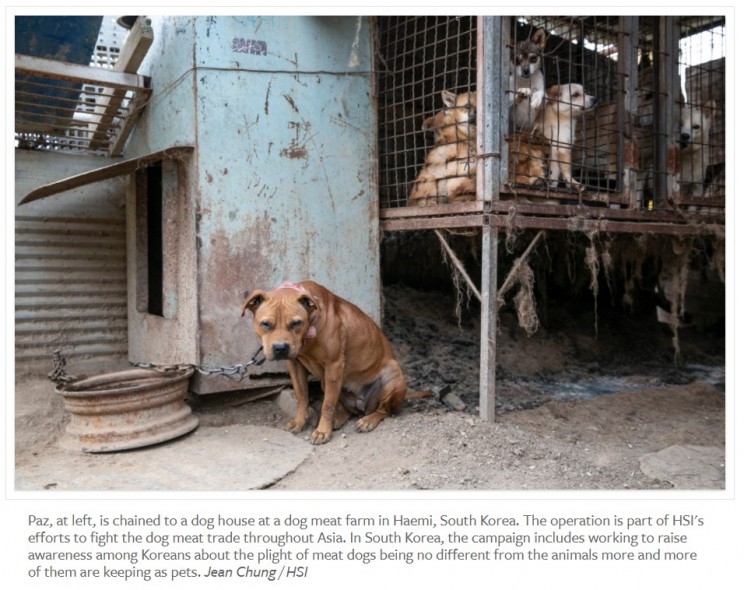 It’s a long way from dog meat farmer Il-Hwan Kim’s operation in South Korea to Washington, DC. Yet that’s the amazing journey being taken by 170 dogs rescued by Humane Society International’s Animal Rescue Team. Together with more than two dozen other dogs from previous HSI rescue operations who had been temporarily sheltered in South Korea, they’ll land in the United States on Friday afternoon. I’ll post a few photographs with an update once they’ve arrived.

Many of these dogs are first headed to our HSUS/HSI temporary shelters in Washington DC and in Montreal, Canada. After a few more weeks in our care, they will go to a number of our animal shelter partners in Maryland, Ohio and Pennsylvania who will take on the responsibility of adopting out these fortunate animals into forever homes.

Our responders worked with Mr. Kim at his request to close his farm and take custody of the dogs, and HSI will also support his transition to a new occupation. He’s more than ready. “There is no future in dog meat at all, it’s already dying and will fall apart completely,” Kim says.

A new opinion poll commissioned by HSI in South Korea confirms Kim’s view. There is growing countrywide support for a ban on dog meat consumption, with 84% polled saying they don’t or won’t eat dog, and nearly 60% supporting a ban. Moreover, the percentage of South Koreans who believe that dog meat consumption reflects poorly on their nation has increased from 36.7% in 2017 to 57% at present.

Over the last two decades or so, the popularity of petkeeping has soared, and now an estimated 30.9% of Korean households (some 5.9 million in all), have a dog.

This is the 17th dog meat farm that HSI has helped to close, part of a campaign to show dog meat farmers, the South Korean government and the South Korean people that there is a better path forward for us all, humans and animals, a path that celebrates the human-animal bond in the most special of ways.

The dogs on the flight represent a veritable United Nations of the canine world, including Korean jindos and mastiffs, Pomeranians, terriers, a labrador and a poodle. We’re grateful to Petey and Furends (MD), SPCA Cincinnati (OH), Delaware Valley Golden Retriever Rescue (PA), Humane Society of Calvert County (MD) and Homeward Trails Animal Rescue (VA) for their commitment to finding forever homes for the dogs.

Every one of these animals will be a kind of ambassador of hope and change, in their new families, at the shelters that take them in, in their communities and even in the broader society. Their journey from the desperate conditions of the dog meat farm to warm and loving homes, a journey that more than two thousand animals have made since we began our campaign of rescue and relief five years ago, represents the sea change in attitudes about the dog meat trade in South Korea and elsewhere.

We’re very proud of the members of our response team, who were obligated to spend two weeks in quarantine and isolation at a hotel in Seoul before being permitted to take on their mission due to COVID-19 safety precautions. We’re thankful for the support and hard work of our shelter partners and others who played a role in meeting the challenges of a largescale deployment, rescue and relocation of animals in need. Special thanks are due to IDEXX Laboratories, the Kong Company and Hearty Pet for providing much needed veterinary supplies and dog food in support of this mission.

Most of all, we’re grateful to you as a friend and supporter of the Humane Society family of organizations. Your continued faith in the approach we’re taking to dog meat farm closure and our other work to end the dog meat trade has made all the difference for these and other animals. So has your generosity. The logistics and expenses of a rescue are considerable, especially in the era of COVID-19, and the costs of our ongoing public awareness campaigns in South Korea and other nations where the trade continues are also ongoing. We’ve shown the way forward with our strategy and our relief missions. With your support, we know we’ll be able to complete the job.