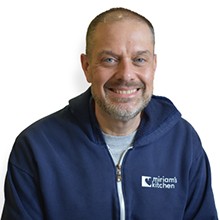 Scott Schenkelberg is the CEO of Miriam’s Kitchen. Since 2002, he has been responsible for setting the strategic vision and planning, implementing strategic communications and increasing revenue to support the organization’s growth. Scott has 25 years of nonprofit management experience.

Under Scott’s leadership, Miriam’s Kitchen was awarded the Center for Nonprofit Advancement’s 2012 EXCEL Award for excellence in chief executive leadership.  During his tenure Miriam’s Kitchen was also a finalist for the 2012 Board Leadership Award from the Center for Nonprofit Advancement and received an honorable mention for our impressive board practices.  Recently, we have been named Washington Business Journal’s Best Place to Work in Greater Washington in 2009, 2010, and 2016 and Washingtonian’s Great Places to Work in 2011 and 2013.

Scott was part of the 2013 class of Leadership Greater Washington and was awarded the 2010 Meyer Foundation Exponent Award given to five nonprofit executives in DC to recognize their strong and effective leadership and a track record of accomplishment.  Before joining Miriam's Kitchen in 2002, Scott was Development Director at Bread for the City and Resource Coordinator at So Others Might Eat, both in Washington, DC.  He holds a BA from Grinnell College.