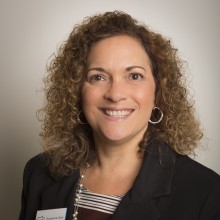 Roseanne joined America’s Charities in 2000 as a Campaign Coordinator with the Member and Campaign Services department. In 2002, she began working with corporate clients as part of the Business and Campaign Development team.  She helped Development Directors maintain their private sector giving campaigns across the United States while working locally in Washington, D.C. to grow business.  She was promoted to Campaign Development Director in 2007 and continued to represent America’s Charities and its member charities’ interests regarding employer workplace giving by maintaining and growing existing managed campaign accounts. Today, Roseanne serves on the Client Engagement Team as a Director of Client Engagement.

Prior to her work with America’s Charities, she was a state-licensed Sales Director for CareersUSA, a temporary staffing firm, from 1996 through 1999.  She was initially based in the Cherry Hill, NJ office where she directed sales for over 100 clients consistently raising office revenues. She moved to Northern Virginia area in 1999 and transferred to the Washington, DC office.

Roseanne has a B.S in Economics from the Villanova School of Business.  She volunteers with the Girl Scouts of the National Capital Area and her church St. Katharine Drexel Mission with the Church Building Committee, among other volunteer activities.